We don’t seem to be the biggest of gamers here, but it is a tablet PC usecase!

Windows, mobile, even console (the Switch at least is a tablet anyway…) gaming all welcome here!

So what have you been playing recently?

I’ve spent the weekend playing Pokémon Legends: Arceus. It’s pretty much the biggest departure from the normal formula for the franchise since… well the beginning really.

It’s been very good fun so far. Sure, the landscape textures aren’t the best, and there are quite a few recycled Zelda Breath of the Wild sounds, but if you like the pokémon catching grind, it’s quite refreshing.

… Zelda Breath of the Wild …

In the same vein, I downloaded Genshin Impact for my iPad mini 6 last evening. Open world, cute, easy to learn, attractive presentation. I can see why they’ve made $billions worldwide on the franchise. When my metered hotspot allocation gets refreshed on the 10th I might download My Time At Portia. I have it on Steam for the PC but I always end up playing Skyrim instead so I haven’t gotten anywhere. It might be more suitable for lounging on the couch with my iPad mini 6.

I’ve played a few hours of Genshin Impact. It does look good and the gatcha mechanic doesn’t intrude onto gameplay much. The gameplay and fighting are solid.

They really have aped Breath of the Wild though. It’s kind of shameful (especially the cooking). And I found I grew a bit bored of the environments after a while.

What ultimately put me off (other than the gatcha stuff), was the ‘waifu’ style of all the characters. I was fine with it at first, but really I was just tolerating it and it got too much for me. I do like a bit of a show (and if that’s what people like, they do them), but it’s in your face all of the time in Genshin.

They really have aped Breath of the Wild though

I never did play that game when I had a Switch. So I’m interested to see what it’s like and that was a motivator to download Genshin Impact. As for the “waifu” aspect, I’m guessing that’s what prompts a lot of the gacha. Young guys trying to win the newest, cutest character. I’ll find out how much I can play, how fun it is without getting trapped into the gambling. Fan service is par for the course in manga & anime so I’m sort of immune.

Yeah, but in most manga and anime it’s only occasional/the odd character or two. And you don’t consume that media for anywhere near the same amount of time as a game. I’d even go so far as to say I even like that (depending on my mood).

But when your character is that, along with all the others (other than minor, inconsequential ones), for the amount of time you play open world games, it’s just not my jam.

It’s probably a moot issue if it’s going to eat up all my metered data, but I’ll find out eventually if it’s beyond my tolerance level. I suspect I’ll get tired of the gameplay before that point. I’m not really into a constant fast action style of RPG—it wears me out.

(Skyrim really hit the sweet spot for me with the stealth archer character build.

I’m a one-trick pony. Only game I’ve ever owned and play only on PC are the two soccer game franchises: Konami’s PES and EA’s FIFA. Been playing since 2000 and lately only PES (prefer its simulation to FIFA’s arcade style). Tried Tennis World Tour, but not a big fan, maybe cos I suck in it. Still have it in my steam library.

As it turned out I never ran Genshin Impact again after that first day. So I deleted it yesterday. It might be fun but it’s an endless game (I prefer storylines to have an ending), must be online, and pay-to-win. I didn’t want to give it a chance to hook me.

Don’t feel bad about it; the story isn’t that great (very clichéd).

Just completed Hellbound on a PC. I also completed Doom 1 & 2 for the first time.

Hellbound wasn’t bad. Reminded me of the Painkiller games. Fun.

P.s. I’m putting together a NUC11PHKi7 as my portable gaming machine. Both locations have large televisions etc. Given up on the Z13 flow.

Darn typing mistake. My apologies. Yes, the Z13 flow, not fold. Although, the Z13 fold does sound like a dual screened tablet.

Lots of people on Tube You have created reviews and that’s enough for me.

One question that no-one seems to have answered: What’s the typing like on the Z13 fold’s keyboard compared to the Surface pro 8? Simple question.

Edit: The answer is that it’s acceptable. Not bad, apparently. You CANNOT (according to a reviewer) order a replacement keyboard.

Rune Factory 4 is 20% off on Steam so I couldn’t resist. I got kinda hooked on the series with RF1 on the DS Lite then RF2 on the DSi XL and RF3&4 on my 3DS XL (not to mention RF Frontiers on the Wii, nearly the only thing I played on it after I added the hack that made Runie management automatic—those things almost ruined the game).

Anyway, I was a bit dubious about a PC port but it seems quite excellent. They really improved the graphics and it’s nice to have the original Japanese voicing (English subs). It has a story that has an ending, it doesn’t have to be online, and there are absolutely no in-game purchases. No pay to win. Definitely old school and that’s a good thing. 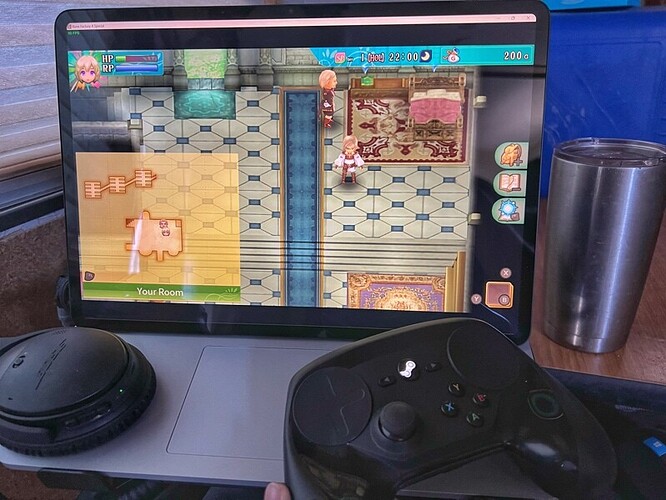 Probably not what the MS designers intended for their SLS.

Despite having spent $27 on a recent sale/promotion to help a certain country on GOG.com, I have managed to limit my gaming to only Diablo 3 on my Nintendo Switch — I do the seasons, and it’s pretty much mindless, and the big reason to play is I have a Loot Goblin Amiibo, so can access the Vault ever 22 hours using it, and for each season, I try to get whatever special thing it affords (last season was Ethereal weapons transmogrifications, this season is Level 125 augments using Rank 3 soul shards on Legendary gear), so it keeps it manageable.

I keep thinking I’d like to play the Enhanced Edition of Planescape Torment, but the last time I looked into that (when it launched) stylus support was broken — anyone know if it got fixed?

What I really should be playing is Ring Fit Adventure — need the exercise since I changed jobs and commuting by bicycle isn’t an option — wish someone would do an (Action)RPG like to Diablo or Xenoblade Chronicles or Breath of the Wild using that interface.

I love Ring Fit. Well, until the controller desyncs. That’s happened quite a lot recently, so I’ve not played for a few weeks. Feeling unfit already.

As for using it as a general controller… sounds like you need to check out Super Louis 64.

I want gyroscopic/IR aiming — standing in for button-mashing doesn’t interest me much.

The Steam Controller had that (gyro). I’ll be sad when mine dies as they all do eventually.

[Recently I discovered that my Switch Pro controller no longer holds any charge even after a day charging; I misplaced my Xbox controller dongle making it useless for me. The Steam controller is the only one still fully functional… for now.]

Well, his code does use the accelerometer and gyroscope, so it is possible.

And Ring Fit Adventure is mainly big movements, not aiming…

And Ring Fit Adventure is mainly big movements, not aiming…

Whoops, I missed that aspect. Not the same kind of thing.