Dave2D doesn’t usually delve too deep into spec comparisons, but in this video did something very few reviewers do: graphing out the frequency response of various laptop models.

Here you see a collection of of some of the better sounding high-end laptop PCs: 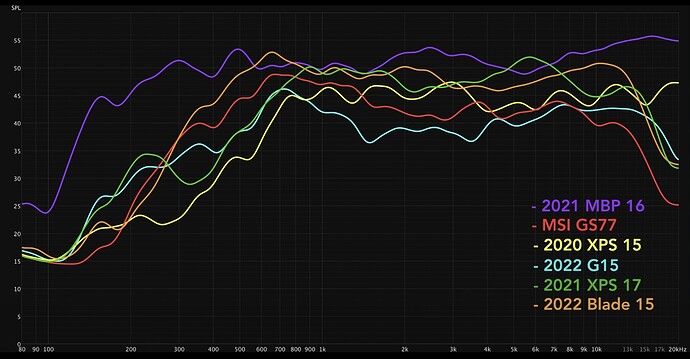 and it’s already very apparent how much the PC models are lacking in the bass (as well as in the upper highs, which lend detail to the sound).

He demonstrates this very dramatically @2:26, by isolating the low-end (<~400Hz) and comparing the output:

This strong bass performance has been consistent across the entire MacBook lineup for years: 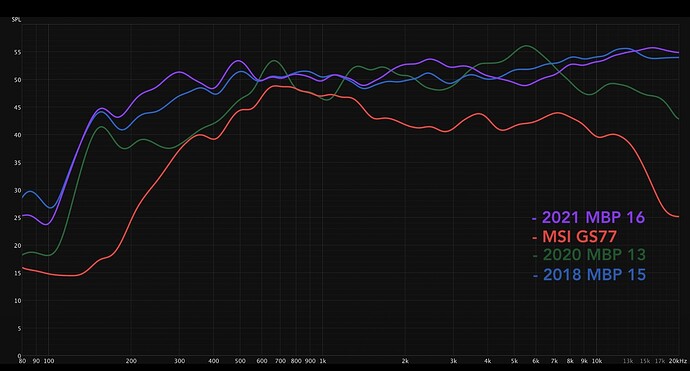 Even in thin form-factors like the iPad, Apple manages unusually strong bass performance and clarity vs the competition. So what’s the secret sauce, why can’t other manufacturers source the same speakers? Is there something about the sound tuning that can’t be replicated?

What’s the secret sauce, why can’t other manufacturers source the same speakers? Is there something about the sound tuning that can’t be replicated?

Basically, being lazy. IMO. They could, they should, they would, but they want every single penny from a sale/device. Shame.

Presumably MS made some efforts to give the latest surface devices good sound, but the reviews were all over the place. Some specifically pointed out how terrible the sound was, while some claimed that it sounded better than ever. Both can be true at the same time I guess

Sound response is an expensive and difficult engineering task in laptops and tablets. It means designing the entire tablet or tablet around it in tight, shared quarters, where its already occupied casing has to double as the resonant cavity of the speakers. That means that the best manufacturers must of necessity engineer the material, geometry, electronics, and shielding, of the casing in tandem with the speakers if the frequency response, distortion and noise characteristics are to be of high quality. The speakers themselves should also be adjusted in windings and shape, as well as position and angling, for a flat frequency response with low distortion, meaning more expense in custom design and significantly longer research and development timelines.

More manufacturers opt to use off-the-shelf speakers with little or no tuning in those areas, and then they apply a lab-measured post-equalization calibration in software. In even worse cases, however, most manufacturers just go the cheap and lazy route, turning up the bass and treble in an optional software package with a generic U-shaped equalization curve combined with a software-based normalization or sound compression technique to hastily mask the speakers’ natural properties of high distortion, high noise, and uneven response. However, the results never are as intended and users immediately discover a tinny, muffled response in most laptops and tablets as @Marty shares above. In practice, a combination of one or more of these techniques are of necessity to some degree given the physics of stuffing speakers into a shared enclosure will result in worse audio quality than a dedicated speaker.

I would not be surprised that Apple, besides custom designing their speakers for their iPads and MacBooks to target an ideal frequency response, still applies some level of software, firmware, and/or controller-based equalization correction. For example, the Dolby Atmos audio processing (this is software) on the Surface Pro 8 does normalization since the speakers are incapable of making soft sounds audible due to the high distortion and noise levels which result from how small its speakers are in a non-ideal firing position. To my ears at least, the Surface Laptop Studio’s sound system is head and shoulders above any other laptop I have heard PC or Mac. Besides its design being clearly tuned and built around its speakers, it utilizes a more sophisticated dynamic (or volume-based) equalization curve, more commonly seen as a loudness button or midnight mode on audio video receivers (AVR).

This is directly based on the Fletcher Munson curve, also known as an equal-loudness contour. (Fun fact: a college classmate and friend of mine was the great granddaughter of Harvey Fletcher.) It works by interfacing with the anatomical properties of human hearing, based on the fact that we are less sensitive to frequency extremes at lower volumes. It adds more bass and treble relative to midrange at softer volumes and less and less of bass and treble (until a true neutral response) at higher volumes. The net result is the sound is perceivably neutral and therefore discernible and pleasing to the human ear regardless of the volume level, soft or loud, you are listening at.

To my ears at least, the Surface Laptop Studio’s sound system is head and shoulders above any other laptop I have heard PC or Mac

So if you move the volume slider a bit near the top end of the range, does the windows “kaplunk” sound come out clean? Mine comes out heavily distorted. I actually thought I had fixed that by turning off some audio optimization, but that turns out not to be the case.

It comes out clean and distortion free. I can only guess. It could be a damaged driver or even a loose key or set of keys since the Omnisonic speakers by virtue of their design radiate from behind the keyboard. In either case, I suspect there is a hardware issue. All I can say is it has been issue after issue with my brother’s Surface Laptop Studio. The first unit had a failed fan and the second one had a bad charging port out of the box, excluding the fact that it was the wrong SKU entirely. I am beginning to think given that it is a total redesign, much like when we saw widespread issues with the Surface Pro 4 and Surface Book when they were released since they were first generation devices built on a new design, that there are issues in their manufacturing process.