Searching because I was curious why the idea of a smartphone that last for weeks, is day light viewable using E-ink screen is not popular. There’s no color/limited color but if you just call, browse webs and read ebook, wouldn’t it be a good trade-off for some people? 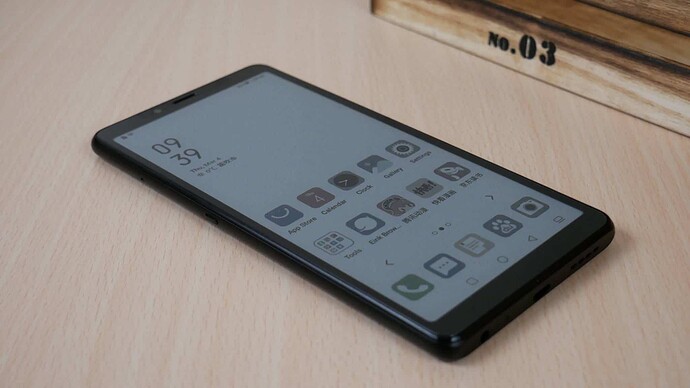 The Hisense A7 CC is the first color E INK smartphone of 2021 and it has flagship specs, that could possibly be your daily driver. It has great hardware specs and 5G internet access that is compatible with most European and US carriers. Great strides...

It’d probably never get a fair shot in the US because “IT’S NOT A HI PIXEL CAMERA!!!” But for a phone to just be a phone, it appeals even in just black and white.

According to one of our Chinese business partners there is new version of the color coming as well as a monochrome one later this year, both running Android 12

Not sure if it was this one or another company, but yeah, I saw a full color version talked about somewhere. I would be interested if it had a pen.

Searching because I was curious why the idea of a smartphone that last for weeks, is day light viewable using E-ink screen is not popular.

I was looking at getting one to fill the last niche in my arsenal.

Was thinking it would be nice to have a pocketable outdoor e-reader to take along on a long hike for some blissful reading halfway, while using my Apple watch for any urgent calls or messages. At the time I think these were $200 or so on eBay, but I got distracted with other tech. I would still love some ultralight ultrathin pocketable e-reader, even without LTE.

Lack of Google play might be a deal breaker though. And Chinese Gov is increasingly making it harder to get Google services on their domestic devices.

I had a nasty surprise with a Chinese imported Xiaomi phone: since Android 11, any third party Google services installation on the Chinese ROM was completely blocked (explained by Xiaomi was per regulation), and the only way to make it usable was installing a global ROM. If the device never had a global ROM then you are out of luck.

Edit: this is only the case of MIUI. Maybe less popular manufacturers get less pressure to lock up their device.

Searching because I was curious why the idea of a smartphone that last for weeks, is day light viewable using E-ink screen is not popular

If memory serves there was one called Yota (or something like that) from Russia. Before color e-ink though. It never caught on because of screen refresh. If you can’t view YT people simply won’t buy them. A problem that will linger on for yet a while.

On topic sort of. We’ve had in our development labs several color e-ink displays over the last 18 months or so.

Getting back to the “right tech for the right job” mantra I always espouse to my engineers and customers, I think the chances of e-ink displays on a mainstream smartphone or tablet are almost nil unless there is huge breakthrough in them specifically in response time/refresh rate.

And the reason is pretty basic, smartphones and tablets much more so than conventional laptops or desktop monitors are used to watch video. And I just can’t see any user of FaceTime or Zoom or YouTube or whatever being ok with being able to see the pixels change.

While I’m certain there are some here (myself included) that would consider a device like that, I also realize that we are a minority within a minority and the economies of scale just don’t make sense.

To give an analogy, the majority of our custom devices are used in harsh or environmental challenging conditions. A common request is for waterproofing similar to what you find on genuine dive watches, typically 100 meters or about 320 ft. But when we give them both the cost as well as the other specs required to actually meet that spec, the typical reaction is shock/disbelief.

And so then we once again dig in to things like, “Ok, real world how will this actually be used”. And occasionally they genuinely do have a need for something like that, and then we have to have a discussion about the cost of materials and testing to provide that.

TLDR: I’d love something a like a Duo with e-ink. eg one display with e-ink and another with an LCD or OLED, but it’s just a wish…

Where I live, there are some people still use black and white feature phone as their call device for long battery life, so I think this should still have a market. Or motorbike shippers who are constantly on the go probably would appreciate something last longer for call and can use the shipper app. Admittedly E-ink is too niche of a tech to consider after people got all used to LCD.

Personally I’m probably too old school because I prefer reading material over video one. Especially when it come to tech review, if there’s no text version and only show a video, half of the time I would just skip the review altogether.

Eh. There’s obviously already a big enough market as it is for the likes of Boox. And remember, Kindles, Kobos, and Nooks are still very popular.

Light emitting displays just aren’t going to be outshining the Sun, or staying on for weeks on end.

It’s a niche, but not a small niche.