I am figuring that, with the level of technology experience on this site, there are a number of you who have either owned a drone or have flown one. My wife wants me to buy a drone and provide her with aerial images of properties she is listing for sale.

I have a pilot’s license that I stopped using when we started having kids in the late 1980s. I’m looking for something that is as small as I can get and still carry a decent camera. Do they make them for Heros? I would like as little assembly and maintenance as possible. And, of course, I would like not to have to mortgage the farm (I don’t really have a farm).

My father is an avid drone user with the required pilot license, a Small UAS Rule (Part 107). He follows all the major drone news and channels and from what I hear every day from him, though Autel is getting close, DJI is still easily the best option out there. The DJI Mini 3 is expected to ship late June, but if you are needing a drone sooner than that, the DJI Mini 2 is more than up to the task. The other drones he has tried have minor to serious bugs and the quality of the filming on the cameras is middling at best.

Thanks, I’ll take a look at the mini2 and 3. I can probably wait until late June.

I’ve got a Parrot Anafi that I’ve used like… three times. It’s fine, though it was a little buggy at launch. At the time it had the tiltable camera and USB-C charging that other drones didn’t have, but I mean, DJI is the most popular for a reason. The one I have is also above the 250g threshold and therefore requires registration. Stick to the DJI Minis and you don’t have to deal with all of that ■■■■. (That being said, it also depends on how much you trust a China-based company like DJI with your data too).

From what I’ve read, the Mini 3 is great and includes obstacle avoidance. If you don’t need that, then the Mini 2 is supposed to be great too.

I’ve also seen some cool videos of sport tracking with Skydio ones, but the Mini 3 can now do most of that for cheaper too.

But yeah, for just taking pictures of real estate I’d say save money and get the cheaper Mini 2, honestly. Probably don’t need to deal with obstacle avoidance there, and it’s got a pretty good camera. Not as nice as the Mini 3 or Mavic or anything, but still pretty good (based on Youtube videos I’ve seen).

Autel have been getting close for years, but never seem to actually release their products to any significant markets.

I’d love a DJI, and have been on the verge of getting one, but news coming out of Ukraine has put that on hold. Accepting goods made in China is one thing… goods made by a company possibly* helping Russia is another.

*It’s unclear if DJI are involved, or if their security is just lax on their drones. With all the misinformation and disinformation floating around, it’s really hard to tell.

Skydio ones look impressive, especially as they have an actual tracker you carry. DJI’s software are okay, but still terrible in comparison. The image quality of the Skydio drones isn’t great though, especially for the price.

I’d love a DJI, and have been on the verge of getting one, but news coming out of Ukraine has put that in hold. Accepting goods made in China is one thing… goods made by a company possibly* helping Russia is another.

Not to derail the thread but yeah, I watched one guy who has realised that the DJI have released software for the Russians to locate the drone launch and landing so the pilot could be targeted. The day they release software that allows the Russians to control a Ukrainian drone sold on the open market however is the day DJI sales drop like a stone. That’s the problem. It could be DJI helping the Russians, or it be the Russians taking advantage of civilian-standard equipment being used.

But even if it’s the latter, that doesn’t exactly leave a good impression.

One final gotcha that should be noted outside of DJI’s highly questionable behavior in the Russia-Ukraine armed conflict is DJI’s Mini 3 may have the very same very slow satellite positioning locking bug that was first introduced in their Mavic 3, in which case the older Mini 2 may be preferred. The issue is them using China’s slower and inferior BeiDou satellite positioning system. There are mixed reports about Mavic 3 taking minutes (rather than seconds) to complete a lock due to its hardware enforced reliance on BeiDou unlike previous models (due no doubt to DJI’s umbilical-like link to the Chinese government). Post-firmware, there are still users having issues depending on the circumstance. Rumor has it that the Mini 3’s firmware will also be using BeiDou for satellite positioning with all the technical inferiorities inherent to it. Obstacle avoidance is a nice-to-have premium feature that the Mini 3 now brings to the table, but the BeiDou satellite positioning could be a serious showstopper if you value your time. My experience is the DJI Mini 2 offers the best image quality and video stability of a mini drone on the market, though the Mini 3 will likely improve upon it that respect. If you want a secondary option so you don’t have to hold your nose to DJI’s Russian dealings, the Autel Evo Nano+ gets very close to DJI in video quality. In the video below, the Autel Evo Nano+'s color, contrast, and post processing appear off to the DJI Mini 2. The Autel Evo Nano+ is available at most major retailers (e.g. B&H Photo Video and Amazon) in the United States. In that, the foliage in the Mini shots looks like smudges. It’s something I’ve noticed on even DJI’s higher end drones.

In that, the foliage in the Mini shots looks like smudges.

That’s YouTube’s crappy compression, since heavy video compression primarily targets and discards data in darker areas first. If you select the 4K video option when playing back this video, it should be less of a problem. 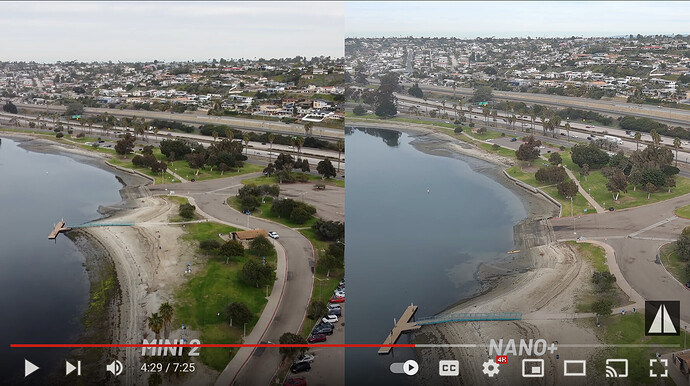 Rather than artificially raising the color brightness like the Nano Evo+, the Mini 3 is recording it properly as a dark green relative to the surrounding vegetation. Therefore, the Evo Nano+ washes out the colors, particularly the greens in this example. In more extreme examples, it can almost seem like a very faint white haze is getting applied to the Nano Evo+. This washed-out color quality has been a huge complaint of Autel drones for years now:

With post-editing, you can somewhat fix the Autel’s washed out colors, but it is still different from capturing the color authentically from the beginning.

I did watch it 4k. The foliage is still notably worse. Ultimately it’s down to using such small sensors; they never are going to look that good. I had a similar complaint with a DC Rainmaker GoPro example and was told to watch in 4k. It’s still looked bad.

And a large part of the target audience are going to be using these cameras to upload to YouTube and the like, so the compression algorithms just have to be lived with.

As you said, Autel’s colours can largely be fixed in post, so I don’t think the washed-out colour is much of an issue.

Ultimately though, for much of what these will be used for, the action will cover up the mediocre image quality. I don’t think they are good for landscape cinematography though.

3D printing drones. Is this the future of construction?