I live in Mexico and was using a Microsoft Surface Pro 6 which was starting to get a bit quirky and was interested in a Surface Pro 8. I ordered an SP8 online from B&H Photo but it got stuck in Mexico Customs and was returned to B&H. I found a eBay vendor who pre-collected customs duties, so figured they were confident about getting it through customs, but nope, it was returned to the vendor, too.

A few days ago I resumed a project: digitizing & retouching ~1,000 family photos. Photoshop isn’t fully compatible with my new HP Spectre X360 14! I can’t even apply a simple Smart Sharpen filter without PS crashing. PS troubleshooting gives a workaround: disable Graphics Processor acceleration. WTH? I buy a pricy laptop with 11th-gen Intel Iris Xe graphics and I turn it off?

PS suggests that the graphics adapter drivers are out of date:

However, Intel Driver & Support Update Assistant reports everything is up to date.

I really don’t want to fly back to NYC to return this computer, but it is an option. Before I do, do any of you have an HP Spectre X360 14 with an i7-1197G7 and run Photoshop with no issues? If I do return it, I will probably buy a MS Surface Pro 8, the original apple of my eye, although I am eyeing a MacBook of some flavor. Apparently, Macs “just work,” and at this point that is alluring.

I am reluctant to pursue the Photoshop issue with Adobe & Intel as I assume they will each point a finger at the other. <sigh…>

Ouch, sorry to hear your troubles. @dstrauss seems have rock-solid unit though (which he’s cheating on with a MBP, the indignity

As a preliminary measure, did you test if disabling graphics acceleration actually stops the crashing?

Go to Photoshop’s Preferences > Performance and uncheck Use Graphics Processor and restart Photoshop.

If it does, we can further troubleshoot with possible graphics driver or firmware changes, etc.

Also side-note, I haven’t used PS in a while as I’ve switched over to Affinity Photo. Have you tried the trial as temporary workaround?

Ouch, sorry to hear your troubles. @dstrauss seems have rock-solid unit though (which he’s cheating on with a MBP, the indignity

“Honey, I’m not cheating on you, you’re just gathering a little dust.”

@wpcoe What Intel driver version do you have?

What Intel driver version do you have? 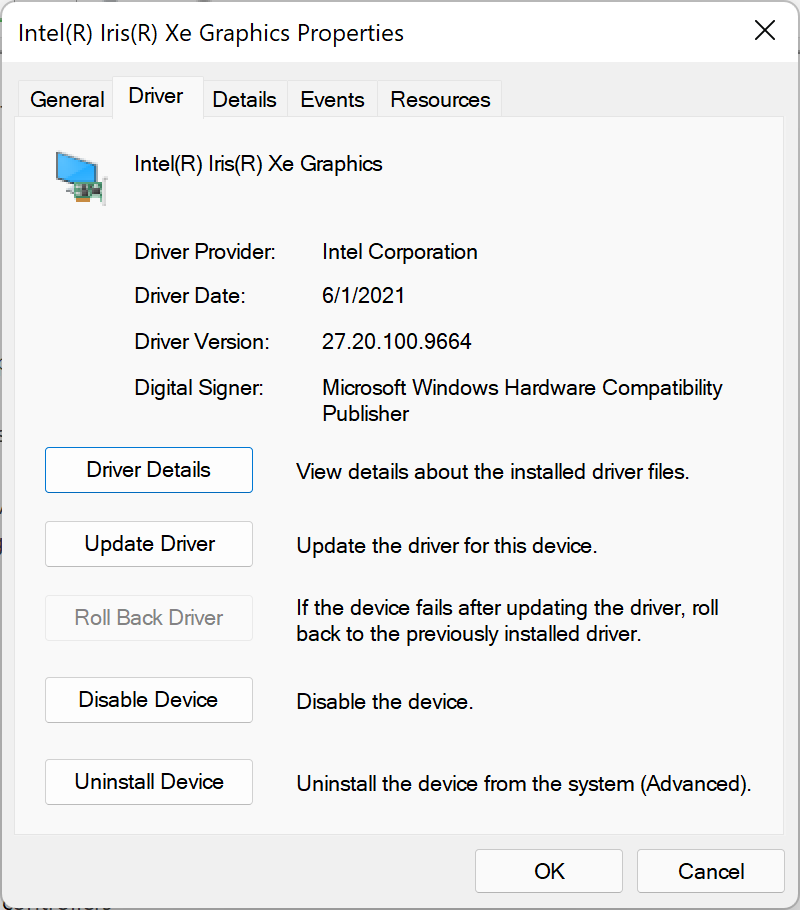 Not to accent my paranoid tendencies, but I’m wondering if my device in particular has a specific problem rather than there being a common problem. I tried various Google searches and the only results linking an i7-1195G7 and/or Spectre X360 14 and Photoshop are…zero. I’d think there’d be fire bells going off if this were being experienced by others, no?

b new800×448 17.5 KB
Got the new driver (for some reason the Intel ''Driver & Support Assistant" doesn’t know about it) and still have the same issue with Photoshop crashing.

And the beat goes on…

I had forgotten I had posted about this here on TabletPCReview!

Current status: I found the culprit causing Photoshop to crash while Graphics Acceleration was on:

I was going through the long list of installed apps, uninstalling them one at a time to see if any of the apps were causing it, and indeed one was: something called “OpenCL and OpenGL Compatibility Pack”.

This compatibility pack allows more of your favorite OpenCL™ and OpenGL® apps to run on a Windows 10 PC that doesn’t have OpenCL and OpenGL hardware drivers installed by default. If a DirectX 12 driver is installed, supported apps will run with hardware acceleration for better performance. This package supports apps that use OpenCL version 1.2 and earlier and OpenGL version 3.3 and earlier.

… but I don’t know what that really means. e.g. “This package supports apps that use OpenCL version 1.2 and earlier and OpenGL version 3.3 and earlier.”