Dex as a daily driver

Background:
I’ve been experimenting with Dex off and on, but a recent experience with the Tab S6 lite pushed me to try Dex on the small screen a little more. I found everything I need to do when I’m at school can be done on Dex, and I actually prefer assignment creation in mobile Teams. So, I started researching the new Samsung tabs and looking for deals. I found what I thought was a good deal at Bestbuy that turned out to be a great deal when I got a surprise S7+ instead of the S7 I thought I was getting. I was already unsure of which one I really wanted, so the S7+ was a very pleasent surprise, but changed the trajectory of how I saw this purchase.

Since I got the bigger one, and since my Surface Pro X has been wonky after the most recent round of updates (I’m on the beta channel, it’s my own fault really), I decided to go all in on making this my daily driver.

I’m going to use Dex on either my Fold 3 or Tab S7+ for as long as I can and see how long it takes before I feel like I need to grab a windows machine to do something.

My first task is to figure out how to get a photo I just took on my phone to post in a comment here from the Tab S7+. 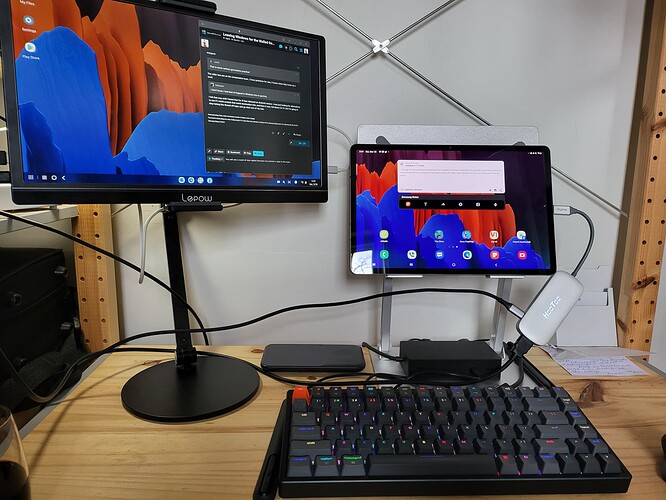 Google photos won the sync contest, getting the picture synced over fastest. I’ll eventually clear out the surface dock and get a nice dock for the tablet if this experiement lasts at least a week. Until then, the dangling HooToo gets the job done. 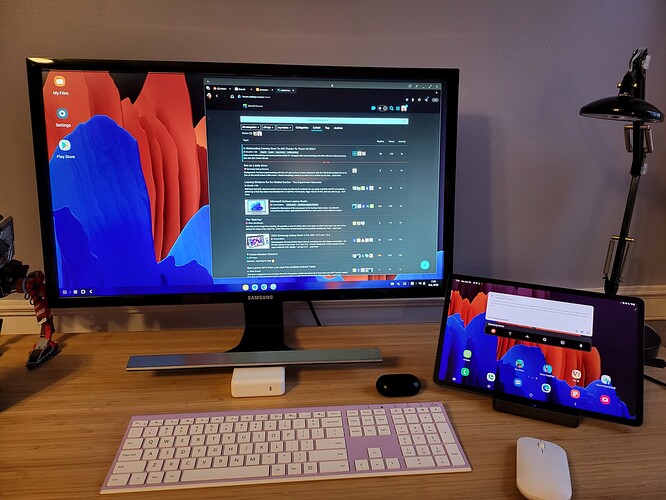 Here’s my upstairs set up with a much larger monitor and actual dock.

That’s really intriguing. Besides Civilization, how are you finding broader app compatibility? One of our customers has done similar and the good news is that Android 12 and one UI 4 has helped significantly, but his biggest gripe is app not working well in windowed mode.

Note that he has enabled the switch that attempts to force apps that would otherwise go full screen to operate in Windowed mode.

PS: One other huge benefit of Android 12 and One UI4 is that Samsung completely overhauled memory management. We haven’t had the occasion to formally test it yet, but even just playing with it, I’ve noticed that it suspends or closes apps much less.

I also force apps to resize and allow windowed and float. The only other app that I know I will run into frustration with is OneNote. I know it won’t do what I want it to do, but it already stopped doing that on Windows. I divide my kids giant curriculum PDFs into individual lessons by copying each lesson onto a page of it’s own. I then make those pages sub-pages so they can be hidden when they’ve been completed. I apparently added too many sub-pages under our language curriculum and now even Windows OneNote won’t let me make more sub-pages. So I needed a new organizational solution anyway.

Other than that, I find that Edge has caught up to giving me the exact same experience that I would get on Windows. So, if I don’t like how an app behaves in Dex, I can just go to the website instead. I alternate app or website with this site, Reddit, Facebook, and several financial apps.

I actually prefer the workflow in Teams on mobile, so that’s a bonus.

The other hiccup I ran into last night while doing a ton of stuff on the external screen in Dex and running Civ VI on the tablet screen on the side, is that I eventually filled up the RAM or something because everything closed and came back up. But it took a couple of hours to get there, and there are complaints that Civ can get crashy in the reviews for it. I’ve never crashed it just playing alone.

@violajack - quite the pioneer! You’ll be fully ready for the tri-fold Galaxy Fold 5 in 17 months - then you will have the very first one device unicorn! In fact, you are inspiring me to go back and give the Windows Android Subsystem one last look!

Maybe…I’m really hoping that Samsung puts out a folding tablet. I had such high hopes for the Neo and I enjoyed using the Duo. I was ready to be all Microsoft and surface pens. But Microsoft has no follow through. Samsung will keep throwing stuff at the wall to see what sticks. I have more confidence in Samsung producing devices that work well together and cover my needs/wants than Microsoft at this point.

I lasted just under two months before I threw in the towel and went back to Windows (and what a relief it was). I wasn’t using a tablet though, but that wasn’t the main issue at all.

I find that Edge has caught up to giving me the exact same experience that I would get on Windows.

You got me excited there for a second! So you don’t use chrome extensions on Windows Edge? Or is there secret hidden way to enable extensions for Android Edge?

Browsing experience is one of those few areas of major differences imo, for someone making the switch from PC to DeX.

No, I don’t really use extensions. What are you currently using that you would miss?

What are you currently using that you would miss?

Sorry had to go and survey my extension list to answer your question.

They are mostly centered around ‘function groups’. Here’s a few examples:

And then there are activity specific extensions, such as:

I find having fine-grained control over the web content really makes browsing way more productive on desktop, almost like a completely different app.

The only browsers on Android (that I know of) that support extensions are Kiwi and Yandex.

Sadly, I think the latter should be out the window for obvious reasons (even though installing extensions is a breeze on it), but Kiwi requires packing and unpacking each extension to install them. The extensions do work though, which makes you wonder why more browser developers haven’t at least put out betas with support for it.

The only browsers on Android (that I know of) that support extensions are Kiwi and Yandex.

I use Kiwi currently, but a huge swath of functionality is lost because context menu extensions and dynamic popups (eg. Google Translate) are disabled. Have you been able to get around these?

I’ve given up with trying to use Android as my main OS for now. Perhaps in five or so years I’ll try again, but that’ll likely take Windows really becoming awful, which even the current direction I don’t see happening.

FWIW, somewhat obscurely stated, but in the Android 12l plans is talk of making the Chrome browser a “fully functional peer” to the desktop OS versions, which obviously implies extension support.

OTOH a lot of IT managers will see that as a mixed blessing as “unmanaged” use of them is also a major source of frustration for them as well.

in the Android 12l plans is talk of making the Chrome browser a “fully functional peer” to the desktop OS versions, which obviously implies extension support.

Could you link the article or press release?

Not that I doubt you, but seeing as this has been on the Chromium Issue Tracker for 10 years with 800 stars, and nary a peep from the Chromium devs…I need to hear this from the horse’s mouth.

I’ll see if i can find it. it was on their developer channel boards somewhere

well, I may have to rescind that as my original notes as to where I saw this which doesn’t really say that. Possibly I saw it on one of Samsung’s devboards. or perhaps just wishful thinking

Sorry to get hopes up

Edit, and just to confirm, the 12l emulator doesn’t support extensions as I checked just now

And just to completely beat this little side trip to death, there are a few browsers that do support at least limited extensions. One of our engineers uses Brave.