Device(s) you want or covet but can't quite bring yourself to pull the trigger on.?

@darkmagistric
regarding swapping the SSD in the studio: Mechanically the swap is easy peasy, 5 minutes tops. However…

if they happening to be using InTune-the device management stack, because of “trusted boot” they will know that the original SSD has been removed, even if you put it back when using it for work reasons.

And I replaced my 27 iMac with the base Mac studio. OMG is it fast

So this is the latest to add to my "want very much but can in no way justify the purchase of " list. We saw a prototype of this last month and it’s truly drool worthy. But… I have a perfectly fine 27 inch 4K Lg UltraFine… 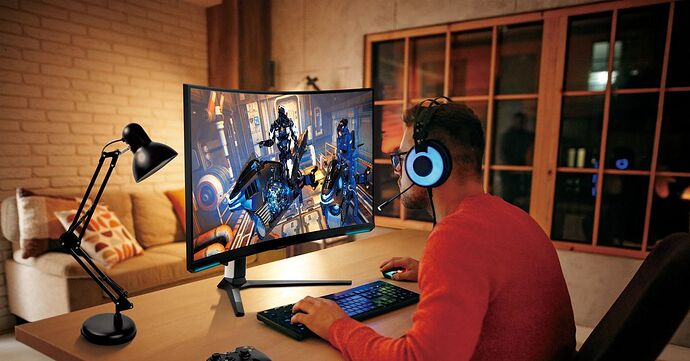 I’m still interested in a laptop with an SPen with a high end GPU… Are you listening Samsung?

Otherwise I flirt with getting an Asus X13 or X13. Or maybe a conceptD7

I’m still using a gaming laptop with Fold4 on super display, but it still feels like a bandaid solution.

The X13 and Z13 use MPP (without Microsoft’s special Pixelsense or whatever it is) and apparently quite a bad implementation of it at that.

The ConceptDs are pretty much the only choice. Not exactly slim, light, cheap, or cutting edge though.

Hmmm, quite a few things I guess.

Pixel Watch: My Fitbit died about a month ago, and I was trying to hold out for the Pixel Watch, but when it got down to what I really wanted and thought I would use, I just got a new Fitbit Charge 5. Much cheaper.

Nova Boox Air C: I mostly do audio books and paper books, but mainly because I don’t like reading on my phone or my iPad, so I think I might actually use this more. But I also want it as a portable sketchbook. Since I “upgraded” to a Pixel 6 and lost a pen on my phone, my only pen device is my 12.9 IPP and it’s not fun to carry around everywhere. But, the Boox is pretty pricey just for a sketchbook. I could carry around pen and paper for a lot cheaper.

Mac Mini: This is probably the most ridiculous on this list. I have a MBP that works just fine. I only ever keep it docked at my desk though, and it’s got a big footprint, even having it on a stand that reduces that a bit. I also don’t like that I have to have a stupid dongle attached for my monitor, keyboard, mouse, etc. The Mac Mini would greatly declutter my desk. But for close to 1k for the version with 16gb ram, it’s really not worth it just for a little more space and no dongle.

M1 IPP 11 (or M2 when they’re released): I bought the 2020 12.9 IPP when they were released about a month before I was laid off from my job due to the pandemic. At the time, I was going to try use it as my only device at home, for writing, drawing, web browsing, watching occasional videos, etc. I didn’t need anything more than those 4 things, so it was going to be perfect for that. But then when I was laid off, I switched careers to become a software developer, and the IPP definitely can’t do that. So now I don’t need the IPP to be my everything device, I can still use it for all the above mentioned reasons, but it can be much lighter, and I think a smaller screen and more portability would be nice. Especially when I’m traveling and don’t want to carry both my laptop and my IPP with magic keyboard. Combined they’re quite heavy. So I keep waffling about selling my current setup and getting the IPP 11 with a magic keyboard. I’m on the fence because I don’t know how much I’ll miss that larger size for art, versus how much I’ll like the portability for art anywhere. I also like typing on the 12.9 magic keyboard, but not sure on how the 11 will feel. This is also where the Nova Boox, or even an iPad Mini would be a decent alternative. Keep the larger one for home, and have a second device for travel. But that just feels too bougie.

Edit: Forgot to mention the last one

Wacom Touch Display: I forgot what their actual name is, but I have a 27" monitor right now, would love a second one that is a Wacom touch that I can use for art at my desk. That would make trading the 12.9 IPP for an 11" an easy choice, but those Wacom displays are very pricey and I just can’t justify one for the amount of art I currently do. It’s just a hobby for me, not a profession. But in a perfect world, I guess I would have the IPP 11 (m2), Wacom Display, connected to a Mac Mini. The IPP 11 might even be good enough as an eReader to not need the Nova Boox.

The IPP 11 might even be good enough as an eReader to not need the Nova Boox.

Funny you should mention that. I was getting ready to pull the trigger on a Nova Air when I realized that it might be a good idea to see if the iPP 11 would suit me better (it was on sale for an iPad Air price). My old eyes are thankful for my choice. The larger 120Hz very nice display is so nice for reading that my iPad mini 6 is sitting unused (will likely sell). I use it bare except for DBrand skin so it’s quite light.

Funny you should mention that. I was getting ready to pull the trigger on a Nova Air when I realized that it might be a good idea to see if the iPP 11 would suit me better (it was on sale for an iPad Air price). My old eyes are thankful for my choice. The larger 120Hz very nice display is so nice for reading that my iPad mini 6 is sitting unused (will likely sell). I use it bare except for DBrand skin so it’s quite light.

Yeah, the only reason I’d want the Boox is for the eInk that might be easier on the eyes at night, when I normally read. That and if I don’t trade in the IPP, I still want something small to carry as a sketchbook.

I wanted Garmin epix 2. But no LTE. So hesitate to spend in case LTE version gets release

the eInk that might be easier on the eyes at night

Honestly, with modern LCD/OLED displays like on the Samsung Tabs or iPads my eInk Kindle Paperwhite pretty much only comes out when I read outdoors. Of course eyes vary. This is just me.

Yeah the idea that e-ink is better/easier on your eyes is pretty much a myth promulgated by people with a vested interest in e-ink.
It is perfectly valid as a preference for extended reading myself included.

As long as you don’t read extensively with the tablet at full brightness (or for that matter e-ink in direct sunlight) you should be fine.

The jury is also out on so called “blue light”. A lot of new tablets have a “blue filter setting” but OTOH normal mixed artificial and ambient light that you’d find in a typical house as at least as much.

The there is an emerging school of thought that sharpness and contrast are far more determinative of eye fatigue. eg. a great e-ink display will feel better than a cheap low res LCD, but a high res LCD like in the iPads might be better than say the low end Kindle.

Yeah, I’m skeptical on the blue light thing. It’s more about how easy it is to read at night for me when the lights are dim. My phone/iPad are either too dim, or too bright in general and it’s not as easy as reading a book with the bedside light on. I suppose if the eInk display isn’t great resolution it would still be harder to read than a regular book, but it feels worth a shot for me.

All that said, a larger device (e.g. iPP 11”) or physical book (e.g. hardcover) with the text proportionately larger is easier on the eyes, as in less strain, in my lifelong experience. I don’t think that needs a study.

Alright, alright, fine, the Boox is off the table. I’ll stick with wanting the IPP 11!

I’m skeptical of the blue light thing too.

But as for ePaper being less fatiguing… I don’t know, but it certainly feels more comfortable for me to read in any light.

(To that end, I am wondering how easy or practical it would be to swap SSD’s back and forth with the Studio.)

By the end of the first week, you’ll have given up or accidentally touched something and caused irreversible damage.

And as a follow up to swapping SSDs in and out. Not with the Studio specifically though it should be the same since they are the same mechanically, but we’ve swapped the SSD at least two dozen time so far on our lab Pro 8 without incident.

The only obvious thing is to make sure the Studio or Pro is truly powered down and not just in sleep mode. But that would be true regardless of device.

The only obvious thing is to make sure the Studio or Pro is truly powered down and not just in sleep mode. But that would be true regardless of device.

Definitely. Loosely related, from what I understand removing the SSD from the SLS also cuts all battery power. Not sure where I read that or what the point would be (another quality post by JoeS

Edit: to make this post slightly less useless (although still in the wrong thread), I learned this in the official SLS repair video.

You could always just use Photopea as it’s browser-based to have a play with the Surface Pro 8 or remote into your personal computer.

For me though, I’ve got my eye on a GPD Pocket 3.
Nice small form factor and for my work and hobbies, that dedicated RS-232 port is pretty handy.
Also being used as a KVM and still being able to draw and write on it… Oh man, it just does things to me.

It’s not an absolute need just yet and I already have so much tech, but if I see one pop up on the used market at some point I might reconsider.

I’ve also heard that the QC of GPD is pretty hit and miss, so that’s another thing, but they seem to be the only people manufacturing these small devices, so yeah… Just accept the gamble I guess.

Your point made me wonder if Apple truly missed a great opportunity by not buying Wacom and strangling the whole pen market instead of building the Pencil.