Dell Latitudes with Zoom specific controls on the touchpad

Although actually Dell has told our customer that it will work with Teams and Skype as well. Also this new touchpad will trickle out as they refresh various product lines, such as the XPS systems, likely only skipping the lowest end Inspirons.

More broadly, this could be the start of a more broad adoption of controls and features on the trackpad or keyboard deck that previously have resided in often buried menus. Our customer that got actual hands on with this (one of Dells larger US corporate customers) said it was fairly intuitive and useful, given they make regular use of Teams 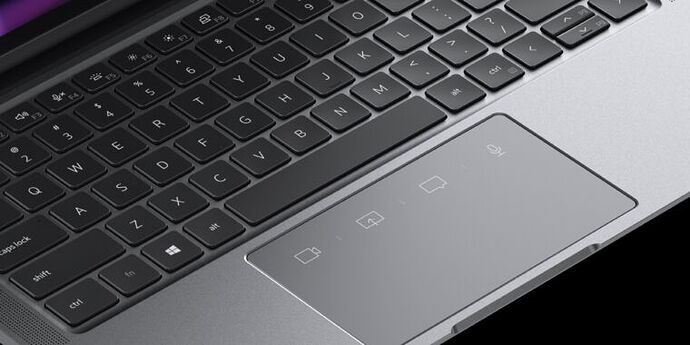 A Zoom-focused spin on the touchpad.

PS: Asus has been trying various iterations of Zenbooks for awhile now, though with to date at least, little broad success. Dell is big enough and present in enough places that they if anyone, might be able to make it happen

This is the sort of thing which should have been a no-brainer for the Touch Bar back when Apple had it on their machines.

The touch bar is to my mind a huge missed opportunity by Apple. Even they half @@@ed it, Arguably Adobe in their creative apps made the best use of it, but that’s a low bar to clear…

I still say that Apple should have worked up a system where:

I’ve been using a Stream Deck at my home desk for similar. Definitely needs to be more of a thing. I know people say that you can just use macro keys, but having the clear identifier of current status on the button itself has been really valuable.

Though to be honest, I also don’t get why Elgato hasn’t been pushing this usage, and developing internal support for Teams, Webex, Zoom, etc. - the only one currently supported is Zoom and that’s through a fairly buggy third-party plugin. They could have made a ton on this, especially earlier in the pandemic.

In the Win11 tablets thread I mentioned that I couldn’t find evidence of pen compatibility. Do we know if it has an active digitizer?

Unclear at this point since they aren’t official yet. If they follow past precedent with the series, certain models will have MPP pen support with the pen being an optional additional purchase.