Not sure if anyone tried it but it looked neat. To use the feature for free, you have to avoid use up the daily 1 hour free time, to be able to access the feature( companion mode won’t count toward your free time to draw on mobile CSP). Any phone will work with finger friendly interface. 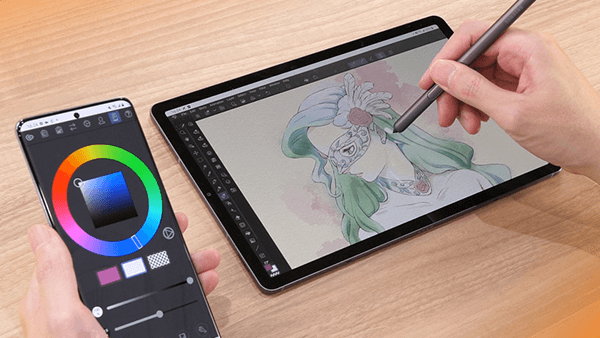 Turn your smartphone into a handheld shortcut device! “New features of Clip...

I’ve been thinking of grabbing this and just keep forgetting about it. I use Procreate much more often than CSP these days just because it’s easier to sketch with. I only use CSP for bigger projects or to finish sketches.

Just tried it. Both devices must be on the same wifi. Responsiveness is decent, but delay still happen here and there. The touchpad
can be used for zoom and rotate, quite useful for non touch drawing screen like cintiq 16 or Wacom one.

There are several tabs you can choose to show: tool and action shortcuts, color wheel, touchpad, color mix pad, sub view and prevew.

A shame that it’s not possible to show more than one of those tab at once (like color wheel on top and shortcut stacked at the bottom). Quite a waste
of space considering how long and thin the modern smartphone had gotten, especially the Z flip.

A shame that it’s not possible to show more than one of those tab at once (like color wheel on top and shortcut stacked at the bottom). Quite a waste of space considering

I didn’t realise it would allow a tablet or Smartphone - basically any two devices on a close network could be used. I have CSP unused on my zbook but I’ve started trying it on my tab S8 and the S* should really be able to show more tabs than one in companion mode.

Anyhow, this might start making me like and use Clip Studio more - I liked the way you could preview a Webtoon directly on your 2nd device.

Companion mode seem to be only working on smartphone. When I click the companion icon on my tab S7 FE, it only show the QR code to be scanned by phone, no button to scan code from PC or other devices.

Basically tablet and PC versions can only be used as host, only smartphone can be used as remote.

Companion mode seem to be only working on smartphone.

Ah well, I should have read the link more carefully. My mistake - but still - this option of a second screen to move a tab over is a great move. As I said above - the webtoon preview is a brilliant feature.
I am going to make more serious effort to use CSP because of this.