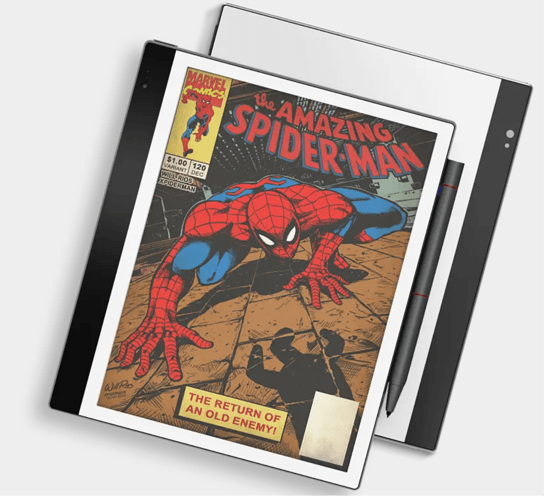 Bigme and Good e-Reader are introducing the InkNote Color

Bigme and Good e-Reader have entered into a co-branded partnership for a brand new E INK Kaleido Plus Android 11 tablet with two cameras. This massive 10.3 inch screen is capable of reading all of your color content, such as comics, magazines,...

It looks like an existing Bigme model, but sounds too good to true and Good e-Reader don’t have the cleanest record.

Kovlowski’s… unique… writing doesn’t help, and that he’s said they don’t have review unit yet for a crowdfunding campaign that starts in a few days.

Would be great at that price. If only.

I was being kind. I don’t think I could add any more warning flags to this without being obvious.

Lengthy Gizmodo article on the InkNote Color. Looks pretty good, I especially like the customizable side buttons on the Wacom stylus.

I bailed in the end as they didn’t address stylus responsiveness in apps like OneNote (that only really Onyx (Boox) seem to have a solution for), and the shipping fees they were quoting people were silly.

I also concluded that I didn’t really need it. Hopefully it’ll get Onyx to bring back a microSD card slot to their devices though.

Really tempted. I have a Kobo Elipsa that I use almost exclusively for document markup, but monochrome is more and more becoming a limitation for me

It seems like a nice device, but this picture gives me pause:

Agreed, though possibly it’s that the photo itself is partly at issue too, specifically because of the anti-glare layer of the display which is for all intents and purposes a polarizing layer.
In other words, it likely looks better in real life.

You can see what I’m taking about with the most recent Kindle in articles on the web, if they use their own pictures instead of the Amazon supplied shots

That’s a known issue with colour E Ink and not unique to Bigme. Onyx and Pocketbook also have this issue, as they use the same E Ink displays.

I can’t speak as to how noticeable it is on its own and not in comparison to a B&W E Ink display.

You were so dismissive of this earlier though!

True I still have issues with the source sponsor, but the hardware for the price is appealing.

If it was from Kobo, I’d likely be ordering one

I see something looks suspiciously like a power button here. Was it EMR?

The buttons are for the Bluetooth functionality. As there’s no silo, it uses a battery instead of a supercapacitor like Samsung does in its Note/Ultra line.

it uses a battery instead of a supercapacitor like Samsung does

I think this means it’s AES, not EMR, right? EMR is the one that doesn’t require any power of its own, AES requires batteries or supercapacitor.

I think @Tams means that it uses BT for other functionalities than inking. The ink function is still EMR.

There are Bluetooth features like some S Pens have. Samsung uses supercapacitors in their stylii with such functionality. Bigme use a battery.

AES/MPP do not use Bluetooth for the main stylus functionality either, though MPP does have the Bluetooth button on some pens.

What has you so convinced? Did I overlook some obvious specs page? Edit: yes I did. They do not say “Wacom” anywhere in plain text, but they have it in an image. End of. 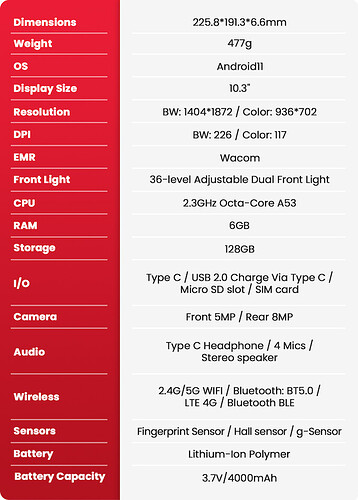 Well, you answered your own question right there.