There’s a good review of it here: 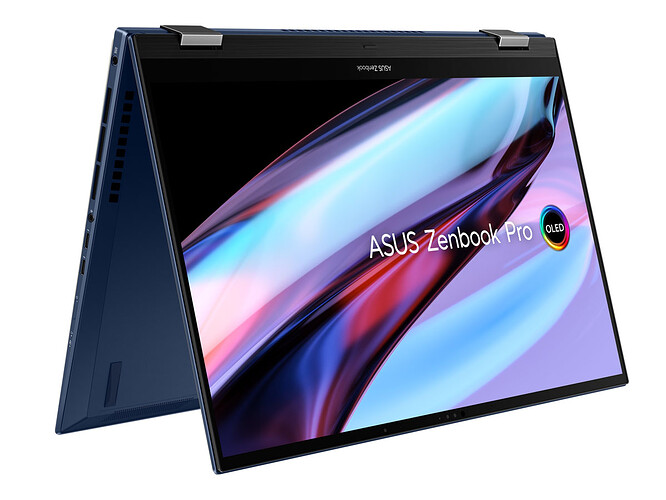 The Zenbook Flip 15 is back with 12th gen Intel Core H CPUs and the new Intel Arc A370M GPU to replace last year's Core U options and the GeForce GTX 1650 Max-Q, respectively. While CPU performance is insanely fast for a convertible, perhaps the...

If anyone is interested, I’d be happy to give my initial impressions and try to answer any questions anyone has.

Congrats, and welcome to Tablaholics Anonymous TabletPCReview! Looks like a very nice system. Small bezels, good DPI, Yoga mode, and plenty of memory and drive space. Would you mind sharing how you plan to use it? Work, school, art, games?

The perennial question: How’s the stylus? Do you ‘art’?

I’ve been a lurker and occasional poster on notebookreview.com and tabletpcreview.com for over 10 years, so I’m glad you’re keeping this going.

As for how I plan to use the Zenbook Flip 15. Sorry, I’m not an artist. It’s mainly for work (office etc.), taking notes, and watching the occasional movie when I have time. I don’t play games.

I’m coming from a X1 Yoga Gen 3. I wanted a larger (15+ inch) laptop with a bright touch screen, resolution greater than FHD, <2kg, and a good selection of ports including USB-A and HDMI (and ideally SD). That gave me very few choices. I actually wanted the Thinkbook Plus Gen 3, but it’s still not available in my country (only seems to be available in the US with a delay of over 1 month) and I couldn’t wait any longer.

Here are my initial thoughts:

Generally, I’m happy with it. And it was almost half the price of the X1 Extreme I was also considering, so I think it’s good value considering what you get.

I’ve been a lurker and occasional poster on notebookreview.com and tabletpcreview.com for over 10 years, so I’m glad you’re keeping this going.

That’s great to hear. We only had a few weeks to leave the sinking TPCR ship and get everyone in the lifeboat to the new and improved TPCR. Major thanks to @Hifihedgehog who had the foresight of setting this up as a barebones refuge at first, and who then rapidly got it into great shape (with some help from several other familiar names, yada yada yada

). Glad you found your way to this version.

The main selling point is the screen (120Hz OLED). It’s fine, but I don’t see what the fuss is about - I can’t see much of a difference compared to a good IPS screen

You must not watch a lot of dark series. I just finished watching The Sandman, and the difference between the OLED Galaxy Book 2 and my iPad Pro was night and day. Some parts were basically unwatchable on the iPad.

My Yoga started peeling after a year and looks terrible now.

Still got my X1 Yoga 3rd gen, and it looks like it’s had a rough few decades.

Yes, I still have a working 15-year old T61p, and it looks in mint condition compared to my 4 -year old X1 Yoga G3 even though it’s been abused far more.

However, I still like the Yoga G3 - I think it was one of the best generations of the X1 Yoga because it was the last to feature the “lift’n’lock” keyboard (which I think is engineering genius!). Since then, they’ve ditched that, reduced the key travel, and removed the microSD card.

My T61p has also lasted much better than my 8-year old Dell XPS 15 - it’s on its second keyboard which has also now broken (and replacing the keyboard is a real pain as it requires disassembling the entire unit). I just hope this Asus lasts.

I still like the Yoga G3 - I think it was one of the best generations of the X1 Yoga because it was the last to feature the “lift’n’lock” keyboard (which I think is engineering genius!). Since then, they’ve ditched that, reduced the key travel, and removed the microSD card.

It was a good one. I think I preferred the solid feel of the ThinkPad Yoga 12. On my X1Y3 the hinge made kind of a “crunch” sound due to that key lock mechanism. And I never liked having to peel open that finicky rubber microSD cover flap on the X1Y3. Still a nice machine though. Anyway, congrats on the Zenbook, hope it serves you well.

I just finished watching The Sandman, and the difference between the OLED Galaxy Book 2 and my iPad Pro was night and day. Some parts were basically unwatchable on the iPad.

So, this is something that is going to get worse before it gets better as HDR standards, at the moment seem to be only a suggestion and most OEM just wink at.

Even somebody that should know better like LG has been basically branding all of their 2022 model displays with “HDR” and in the case of their lower end models. most of them can only hit 250- 300 nits at best.

Specifically in your case the reason the Galaxy Book Pro looked better was due to it processing a HDR10 signal which is the minimal HDR spec and has a relatively compressed dynamic range compared to other HDR formats. The iPad Pro tries (and fails IMHO) to decode a Dolby.

And that’s not a knock against the Galaxy Book OLED either, its actually quite good (though color accuracy could be better IMHO)

My daughters Pro 12.9 does a much better job compared to my Pro 11 but it’s still not great.

A big chunk of the problem lies with Netflix as in the case of The Sandman the target device was Samsung’s Q90B series of TV’s which are their top of the line and have maximum brightness levels more than double the average consumer set.

They are even using Sandman to demo the sets in some trade shows recently.

And OTOH, something like Season 4 of Westworld on HBO has the opposite problem where you can more easily see compression artifacts such banding that buried in the murk on lesser sets.

And FWIW generally, for any display to have even a shot at properly displaying HRD content, it really needs to be certified as HDR 400 and realistically HDR1000 to have a good shot at the higher-level formats such as Dolby.

And there is just the smallest handful of computer displays out that are HDR1000 certified displays, and they are all standalone monitors. There are a few HDR400 laptop and tablet displays out there such as in the miniLED iPad Pro 12.9 and Dell’s newest XPS 13

TLDR at the moment buyer beware on any display that claims HDR especially if it doesn’t have a number or codec after it.

PS: If you want to get sense of how well or not a lot of the HDR is working on various TVs, check out the boards over at avsforum.com

And FWIW generally, for any display to have even a shot at properly displaying HRD content, it really needs to be certified as HDR 400…

How do you know if it’s certified, though? My latest laptop, a Lenovo Slim 7 Pro X, claims 400 nits and Dolby Vision but I didn’t take that seriously, thinking it just marketing fluff, Dolby whoring out their name for $$.

The fact that they mention dolby vision specifically including the trademark says that it’s legit. Be aware thought that HDR 400 is the minimum spec for compliance with genuine HDR and that there will still be some content like Sandman that will push it beyond it’s limits.

The Samsung TV I mentioned is HDR2000 for reference.

Also if the decoder is legitimately engaged you’ll get a “dolby digital” water mark in the display for a few seconds when you first start it.

Last but not least specific to PCs and Netflix or Disney, because of DRM/HDCP stuff the ONLY way to get the highest quality stream is via the dedicated app and not the browser AND it may not be enabled if you have an external display connected again for the same reasons.

Did I mention before that streaming video is a PITA at the moment.?

PS: There is also this list of actual certified devices though they are a bit slow to update it.

PPS: something like the list above would be great for a sticky section on this board, though I don’t think we have that yet?

PS: There is also this list of actual certified devices though they are a bit slow to update it.

Last year’s Slim 7 Pro 14 is listed so it would make sense that this newer one qualifies as well. Thanks.

Specifically in your case the reason the Galaxy Book Pro looked better was due to it processing a HDR10 signal which is the minimal HDR spec and has a relatively compressed dynamic range compared to other HDR formats. The iPad Pro tries (and fails IMHO) to decode a Dolby.

I thought in my case it was a simpler explanation, namely the common issue that and LCD cannot display deep blacks because of the always on backlight. The amount of backlight glow in dark areas of a scene was huge. On the SGB2 the dark scenes are actually almost black as opposed to translucent gray.

BTW I do often see compression artifacts (as you mention) because the compression method doesn’t care about subtle differences in darkness. Anyway, it’s pretty telling that I am willing to use my slow-as-molasses SGB2 instead of a snappy iPad for watching a show like The Sandman, simply because of the better contrast ratio.

Side note, I totally went into that show expecting to see a guy in a striped black and green shirt fight Spiderman.

We have a small segment of our customers that are in the content production side of things, so we’ve been dealing with some of these issues and subtle differences for awhile now. And it doesn’t help the the various companies involved have been slow or incomplete in both implementing standards, and doing nothing to educate customers about some of the changes they might want to make.

The best recent example is the wider support for HDR with Windows 11. Almost to a person customers have enabled it and the first reaction is that the image is too dark. What’s happening in this case that the larger dynamic range skews the image perceptually darker at first.

Of course showing some true HDR content side by side in HDR enabled versus SDR of the same hardware shows some of the immediate differences (and IMHO benefits).

And one odd thing I’ve observed is that while many will constantly tinker with the various settings on their PC itself, those same people will set their display up once and are hesitant to touch them going forward.

To wit, if the image looks too dark after you enable HDR, there is an easy fix which is to go in to your display controls and turn the brightness up.

OTOH, there is some education involved too. I don’t think you are in that group, but we work with several folks that calibrate displays for high end home theater and they say the same thing which is that the image initially looks too dark. The counsel there is to try it for a few days, and then if it’s still too dark, here’s how to adjust it.

And just as a BTW, the display brightness and contrast settings are intertwined and some times a small adjustment there can also make a big perceptual difference.

That all being said, we always tell customers that first and foremost, it’s your device and you should set it to what’s most pleasing for you.

PS: Our home theater colleagues say that The Sandman has created an uptick in their calibration business as like I said in an earlier post, it’s a bit of a torture test for HDR capable displays.