Guess you guys might have missed it, but some new rumors came up last month on the Pencil 3. It’s the usual “Apple filed a patent” thing so I guess it’s not reliable at all, but I had to post it here because dreams can come true at TPCR. 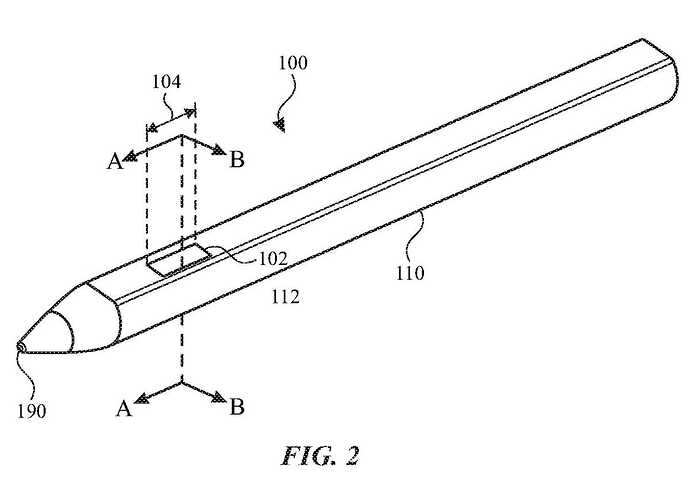 The next Apple Pencil is under development, it seems, with big changes in hand (literally).

It seems like a strong possibility considering at least two of the iPad lines (including the Pro) are confirmed to be getting redesigns. I could be wrong but it seems like Apple would want to do something with haptic feedback at the very least.

If they change the Touch Bar on the pencil to respond to swiping motions instead of taps (I think they say you could invoke a shortcut with, say, a small downward swipe of your index finger), it might actually get some use from me.

Can’t say haptic feedback is high on my list of important factors to consider apple for art, but I’ve been wrong before.

The odd thing is…is there really much more they could improve? Over the past year bouncing between EMR, Apple Pencil2, and Microsofts Slim Pen 2, as much as it pains me to say it the Apple Pencil 2 is really pen perfection.

And all the gimmicks like the Samsung Bluetooth Feature, and the Haptics in the Slim Pen 2 have left me quite underwhelmed. The best Bluetooth feature is remote shutter, but that really only applies to phones and its situational at best. If anything the best things they could add to a Pencil 3 would be a backend eraser and increase compatibility to iPhones.

Offhand, I just fantasize about it being somewhat lighter, with a slightly sharper tip that is made out of a slightly softer substance — but still keep that big cone shape that kind of gives the Pencil the edge on tilt functionality. I think this may be Procreate’s fault, but if it isn’t, I’d like Apple to improve the tilt detection.

They could also improve the battery life to something crazy like 20 hours, but that’s being the most nitpicky considering how fast the Pencil 2 can already charge.

I think it would also be cool if they came up with their own clip-in design for the nib rather than screwing it on. I used to have a lot of nibs come unscrewed frequently but it might have been a QA thing because it happens rarely out of the one I have now (and I might be on, like, the 12th nib….) Yeah the insanity doesn’t end with me, but about a year ago I decided not to use screen protectors anymore. My screen has quite a few hairline scratches on it now, though — some are pretty bad and can sort of be felt with the Pencil tip passes over it, and I never did that to my screen with a Surface pen or on the MobileStudio. Unfortunately this is another reason I’m somewhat eager to trade in and move on from my 2020 12.9”.

I think the two things Apple could improve upon in basic functionality are latency and ergonomics.

People don’t really grasp it until they use it extensively, but the lower latency of Samsung’s latest S-pen really gets close to the “pen on paper” responsiveness that analog provides.

And many don’t care for the size and shape of Apple’s pencil, as for instance many, myself included would like a smaller option. as one example.

My hope is that they don’t do something like some rumors which is to transmute the touchbar from their MacBooks on it. That would IMHO create a usability nightmare.

I think the two things Apple could improve upon in basic functionality are latency and ergonomics.

People don’t really grasp it until they use it extensively, but the lower latency of Samsung’s latest S-pen really gets close to the “pen on paper” responsiveness that analog provides.

And many don’t care for the size and shape of Apple’s pencil, as for instance many, myself included would like a smaller option. as one example.

My hope is that they don’t do something like some rumors which is to transmute the touchbar from their MacBooks on it. That would IMHO create a usability nightmare.

Improved latency would be amazing. I don’t personally mind the size, but I can understand the desire for multiple sizes. I’d prefer to keep one this size even if they offer a smaller version though.

If anything the best things they could add to a Pencil 3 would be a backend eraser and increase compatibility to iPhones.

An eraser would be magnificent.

I think the biggest improvement could be on optional types of nibs. I personally would like a slightly softer felt nib. I can’t even find felt in the aftermarket though.

Is it taking the carpenter pencil shape of the slim pen?

Battery-less design
Recommend a matte screen protector to minimize the gross feeling of the nib on the ipad screen
Actual physical button, maybe 2 buttons
Better weight balance (at least with the gen 1)

I literally just had to mention offhand that I finally got to try the Tab S8 Ultra last month, in the middle of July, on two different visits to Best Buy and basically fell into the camp that kinda-sorta thinks the best experience is technically on Samsung/CSP right now. I also have to confess to never actually getting to use the Slim Pen 2 for myself — Windows demo units still wouldn’t let me install CSP, unlike how easy it was on the Tab.

Maybe what blew me away the most is how good the S-pen felt without any calibration, I mean I think it handily outdid my memories of 2016-era Wacom Pro EMR, but I don’t know if it feels any different now on the newest Cintiq Pro with W11. I’d be curious to know if the pen cursor still needs to be calibrated within the drivers or if they managed to move past that like the other pen techs.

I have to imagine I’m in the minority on this, but if Apple doesn’t update the Pencil, I probably need to just go over to Samsung for at least 1 generation. It’s going to be a tough call.

I did sort of get married to Procreate, but without Pencil 3 I’d have to file for divorce with a somewhat heavy heart. BTW, it would be a dream come true for me if they go carpenter-style, but with that Apple design style — such as the aforementioned speculative improvement to touch commands via a small swipe with the index finger, followed by a tiny haptic burst to inform you of registered input (so you wouldn’t have to, like, glance up at the top dash in Procreate to make sure it switched you to Eraser). I think I’d personally love that but YMMV. Actually, maybe I’d end up disabling that, too, just like it disabled now, and then lament the unnecessary extra parts in the stylus.

Think we all have bated breath for this Fall. Gonna be a pretty exciting time between this and the Surface event.

Edit: FWIW, I would have disabled the button on the S-pen if I were to get neck-deep into using a Tab. Physical buttons worked out about as badly for me as the touch-tap feature on Pencil 2. After giving it some more thought, the swipe-down motion on the patent really sounds enticing. I hope it’s true and not merely a product of the patent-lawsuit wars. Also that “married to Procreate” line was terrible but it was kind of an inside joke/reference to this board, sorry. Someone used that term a while back in a software thread, sort of vaguely in exasperation as they may have known people who refused to use anything else

. Just thought it was hilarious.

To me, the SPen remains state-of-the-art in note taking. Nothing, not the new surface pen nor the Apple 2 Pencil, can match its downright feel. If my computer use was more note-dependent than document production focused, I would have figured a way to transition to a Samsung S-Series tablet long ago. IMO, they offer the best tablet/writing experience of anything on the market. As it is, I have transitioned my small note taking to the SPen, leaving research annotation and draft document editing the only handwriting tasks left for the Surface. Since I am no longer in a larger firm setting, where I was supervising other people’s work, I don’t find myself hand editing other lawyer’s drafts anymore. That leaves only research annotation, which I do more and more with only a highlighter. To be honest, handwriting has become less important to me than the camera and mike function on the Go2, since almost everything I do these days involves videoconferencing.

Fascinating thing is, I find myself inking less and less every week.

Thin it down and slide it into the spine of the Magic Keyboard 2; double hinges; and call it quits.

Surprised that handwriting is going away among the tribe.

Surprised that handwriting is going away among the tribe.

I’ll be honest, I only ever tried handwriting way back with my HTC Flyer. It was the right size for it. Everything else has felt too big and I’ve adapted to typing my notes instead of handwriting them. I think at one point I tried a handwriting to text translation thing with my Lenovo Miix 700, but it was not very refined and didn’t stick. I’m guessing the technology has gotten a lot better, and I’d probably be tempted to try again if I ever picked up something like the IPM6. Until then, the pen will be just for art for me.

Uhn, uhn, nope and no.
Annotating source material in PDFs is still a major part of how I spend my day. It is hust so much more convenient and natural doing that on a tablet with a stylus in hand,

In the meantime, I have finally found a slip-on grip that works on the Apple Pencil while allowing charging if you don’t have a case that gets in the way. It works fine with my DBrand skin. 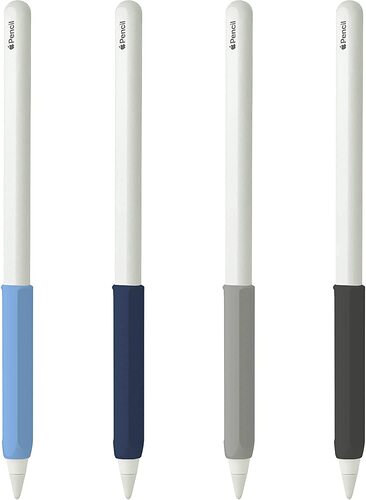 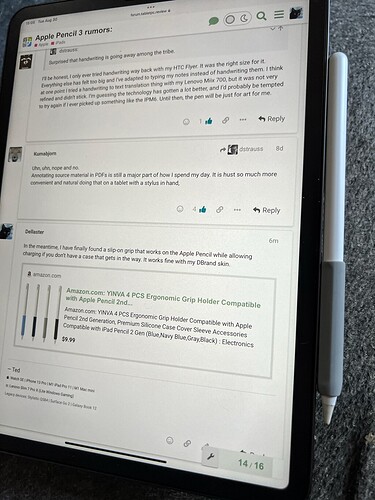 I don’t have an ipad, but I use a ReMarkable tablet. I ink every day. Love it. Ink in client meetings and then type them up later. Ink when I brainstorm. Ink when I journal. Ink when I do todo lists. Ink when I map out projects and timeline. So, I’m definitely still inking.

I think there are others still around here that are inking a lot too.

It’s a shame ReMarkable have gone down the subscription route, and lock their devices down far too much.

Totally. I’m grandfathered in, but I hear you. I’d probably buy an alternate e-ink device if I didn’t already have this one. But for what it’s worth, I do love inking on it.

I do love inking on it.

That’s what I like most about my Boox Nova 3 Color. It takes great notes. Even outside.