Oops… it happened again. Bought something I didn’t need.

So first off: nobody should buy these.

So why did I buy them?

Now that I have them, what do I like

So I do like the convenience, I appreciate the sound, I love the noise cancellation, but this feels like “$250 worth of enjoyment”, not quite $430. With Costco supposedly I can return them until 90 days after purchase, so I’ll keep them and see if they grow on me (and whether Apple releases a much better version 2 in the coming three months). 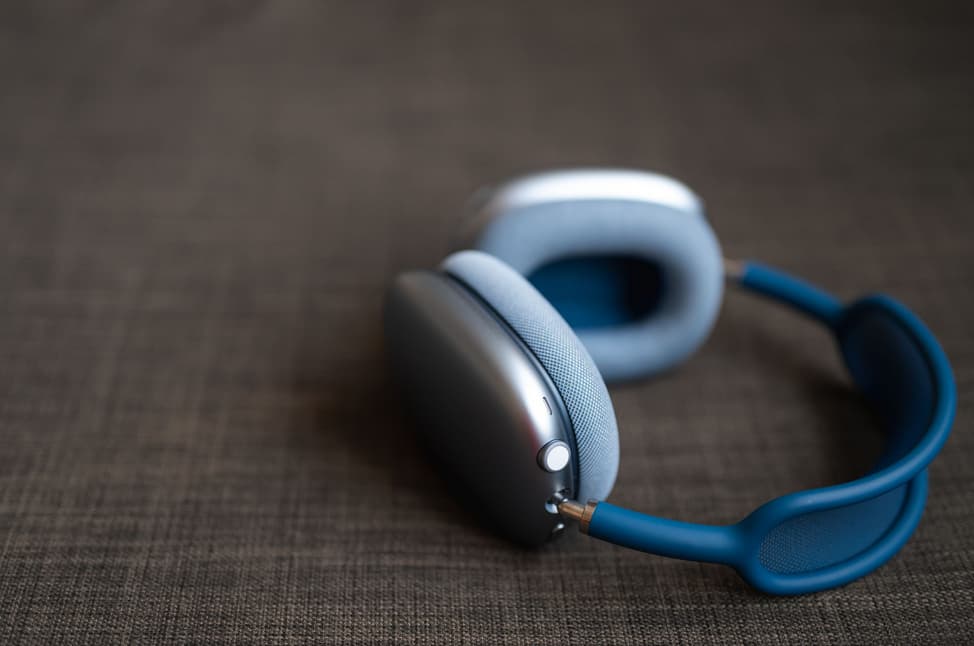 BTW if you have some time to spare and you are vaguely interested in these, that review by Marius (who absolutely loves the sound btw) is worth a read. Sample quote: “Several hours of listening later, I wanted to make sure I wasn’t just experiencing some sort of hallucination caused by the extreme clamping force of these metallic behemoths…”

the sound is pretty intense on the high frequency end. I haven’t seen a response curve, but I’m thinking there’s some “treble boost”. 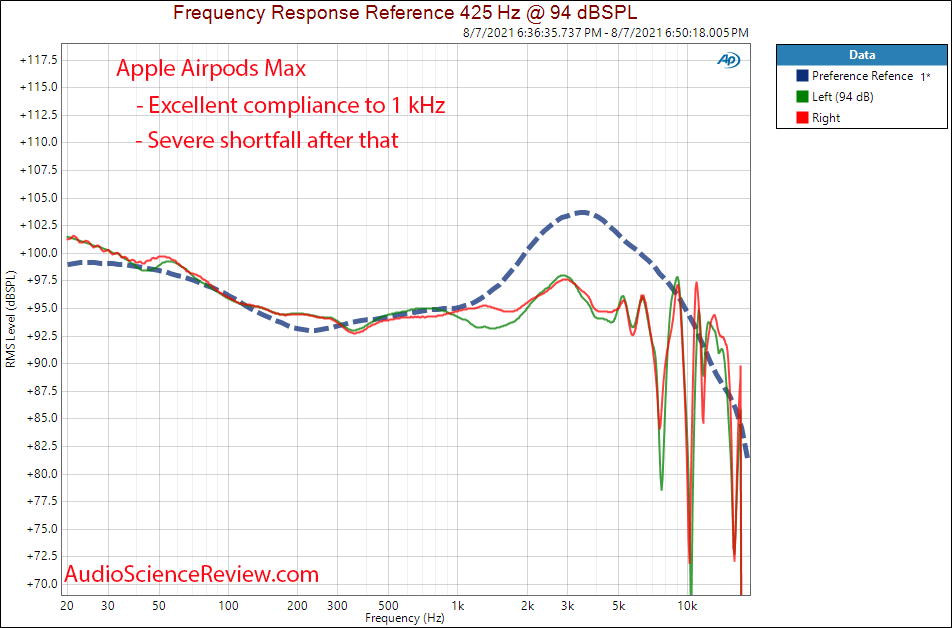 Good points otherwise, but I will have to disagree on the description of the AirPods Max’s sound signature. If anything, the treble is heavily shelved on the AirPods Max, like listening through a blanket. It reminds me of why I absolutely despised Beats by Dr. Dre (all bass and treble missing) and no wonder since Apple bought that company and the pedigree of their audio “expertise” (if you can call it that!) shows. Now, headphone frequency response graphs were hit-or-miss in the past and still are even with $10,000+ equipment if you don’t know what you’re doing (looking at you, RTINGS), but AudioScienceReview and Crinacle both match precisely with what I hear. As to why you hear a treble boost, it could be the contrast of the reference-level extreme treble (the “air” or those highest pitches at 10 KHz and up) with the heavily muted lower and mid treble that is causing this. I also see some peaks as well in the 10 KHz range which means it is pretty grainy and unrefined there too that is not doing any favors. This incoherent treble in the AirPod’s natural response could be making it sound piercing since you have to max out the volume just to get enough lower treble, at which point the high treble, which does not need that extra volume, is overcompensated and gets overwhelming.

Good points otherwise, but I will have to disagree on the description of the AirPods Max’s sound signature.

They sounded very bright to me doing a back and forth with the Sony 1AM2’s that I mentioned. I’ll go back and do that again, and maybe see if I left plastic covers on the Sony speakers.

I think both can be true in this case. In other words, the Airpods may sound bright comparatively.

I have some B&W wired headphones and they have a somewhat dark sound signature. I’ve heard the Sony’s described as “warm” on places like head-fi which usually indicates a tuned down treble.

One other thing and you are likely aware, but especially with audio because of the way your brain processes sound, whatever you use on a regular basis becomes the reference or default as to how it should sound.

because of the way your brain processes sound, whatever you use on a regular basis becomes the reference or default as to how it should sound.

Very true. That also makes it very hard to do a good job making a decent mix out of a recording. At some point I read a tip to listen to the mix on several totally different audio systems, including in your car. Pretty good advice. 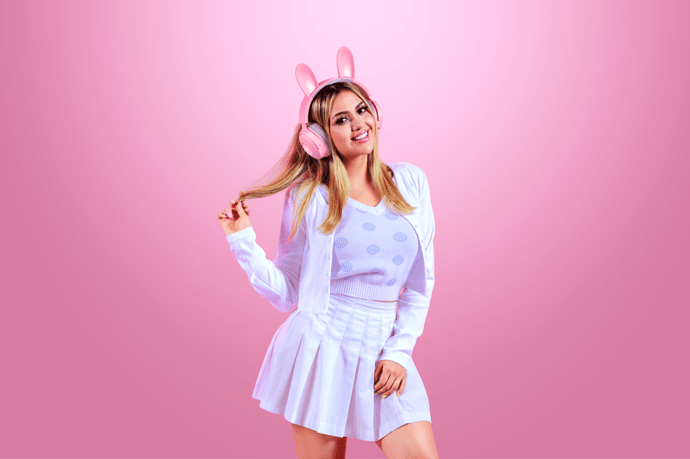 The Razer Kraken Kitty Edition V2 has been unveiled at Razercon 2022. It includes kitty, bunny and bear ears in the box, along with a detachable microphone. It goes on sale later this year for US$199.

I guess with added ears it sounds better?

I have never felt my age more keenly than right now.

I’m a millennial and of the younger crowd here and I still don’t get it.

Well, after extensive listening tonight, these are going back. [edit a few days later, they’re still going back, but the sound improved a lot after resetting them]

Well as I’ve told many “good sound” is highly subjective and individual. I’d describe the Pro Max as 'balanced if a bit warm".

And I’m reminded that my favorite pair of in wired in ears, especially for something like jazz or acoustic folk, the Etymotic ER4’s are among the most polarizing in ears around.

I find them highly detailed and accurate, while the other true music lover in my family, my daughter, finds them cold and sterile sounding…

And then there’s the non audiophiles like me who purchased Bose QC 35 II headphones for the frequencies the ANC blocks effectively. Namely, loud gasoline generators. And, being an audio peasant, I think they sound good, too!

Well as I’ve told many “good sound” is highly subjective and individual.

I totally agree. Despite that I’m almost thinking there’s something off about my APM though. I’ll try to see if it’s possible to force reset or firmware upgrade, because the difference with my Sony’s+DAC is so pronounced. If they do go back I will definitely miss the ease of connection, auto pause, picking up phone calls, and excellent ANC, but I’ll enjoy the close to $500 back in my pocket!

I had a nephew that interned at Bose when he was going to college. Far more than any other audio company, they go full on in to psychoacoustic or how it’s perceived versus technical “accuracy”.

That approach as much as anything is why I think they have led the industry in noise cancelling tech for so many years (and the new quiet comfort II’s retake the crown IMHO) . And for that matter if you like the Bose “sound” signature you are all set.

Il will say that the overwhelming majority of noise cancelling headphones I see on planes etc. are Bose, so they must be doing something right

And this is going to sound weird/trivial, but you also might try something as basic as reseating the earcups as well.

I can’t recall where I read it, but there was a whole thread on the topic with the net belief that a bunch of the Maxs came with them misaligned slightly coming from the factory. The people that discovered this, did so by accident when they just bought additional earcups.

might try something as basic as reseating the earcups as well.

Oh wow, interesting! Will definitely give it a shot. BTW the other day I found something mildly interesting: there was an angle where the sound from a nearby running tap appeared like it was beaming right through the ANC. Some kind of specific relative orientation where the ANC algorithm wildly failed to predict the best choice of “anti-sound”. Truly as if there was a hole in my ANC shield. Funny. I didn’t see any evidence of dirt in any of the mics so I think that wasn’t it.

There is an extensive thread worth reading IMHO at head-fi.org on the Max’s and they have reported similar things as well as noting that small adjustments to listener position or to the fit can also make noticeable differences in sound signature and noise cancelling.

The cynic in me would argue if that’s broadly true, then the max may be more trouble than they are worth. OTOH fiddling with mine I did get them to an “ideal” positioning, and the perhaps single benefit to apples case (bra) is that you don’t have to collapse them down when putting them away.

I suspected as much, so I did my sound quality comparisons mostly with ANC off (not transparency, just off). That didn’t help as far as I could tell. As for the “case” I ended up buying a stand with magnets on the support post, and that works pretty great. Another item to return.

I’m almost thinking there’s something off about my APM though. I’ll try to see if it’s possible to force reset or firmware upgrade, because the difference with my Sony’s+DAC is so pronounced.

Well I’ll be darned. I did a factory reset (hold two buttons until LED flashes white), re-paired them to my iPhone, and voila, phase issue and hollow sound resolved. Everything sounds beautifully placed! I guess I’ll evaluate a little longer before returning.