I will be describing my use of the rare Acer’s Concept D 9 Pro Unicorn Tablet. Knowing that the old forum will be closing, I will post my update. 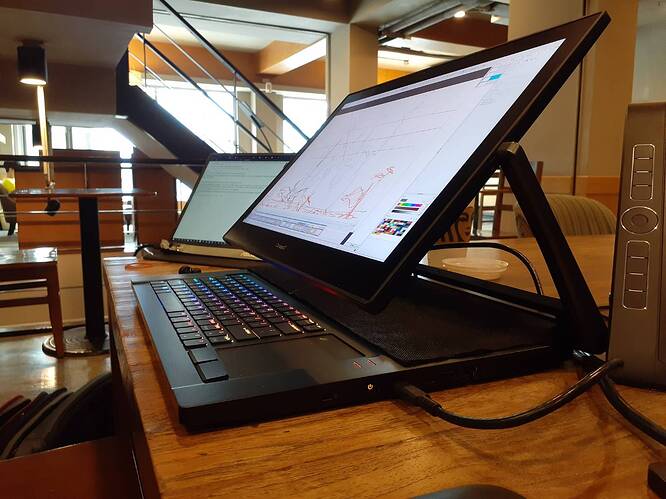 User Update I have been using the Concept D 9 pro Update January 2022:

I have been using the Concept D solely for Storyboarding and VR gaming and I must say, this thing is one powerful laptop even today in the era of RTX 30 series.

This laptop is so smooth on just about anything you throw at it. The Pen is super responsive. I dont really see much of a difference to my 27 inch Cintiq. I have stopped using the Cintiq almost completely and use the Concept D for my work.

Not having the feel drivers haven’t been the issue at all. But there are some things that I had to do for me to have it perfect for ;my workflow.

That is about it really. It performs as you would expect a powerful desktop with a Wacom display. Is great that you dont have to worry about slow downs, these thing just wont, is just blazing fast. Definitely worth it for a Storyboard artist like me.

I own a good selection of VR headset and even the most demanding does play. Below are some that I have t;ested and wo pretty good.

For being 9 lbs, I have no issues taking it anyway to work. I go often to work at Starbucks and is like having a desktop level computer.

Super quite, Acer clearly setup the fans and thermals to keep the laptop quite. The only time you would hear the fans ramp up is during VR as it is graphically demanding.

If you can fork out the money and and want a powerful hardware with a large wacom display, I would not hesitate to recommend it. I particularly like the Pro version because of the matte display.

Here are some pics of me at Starbucks 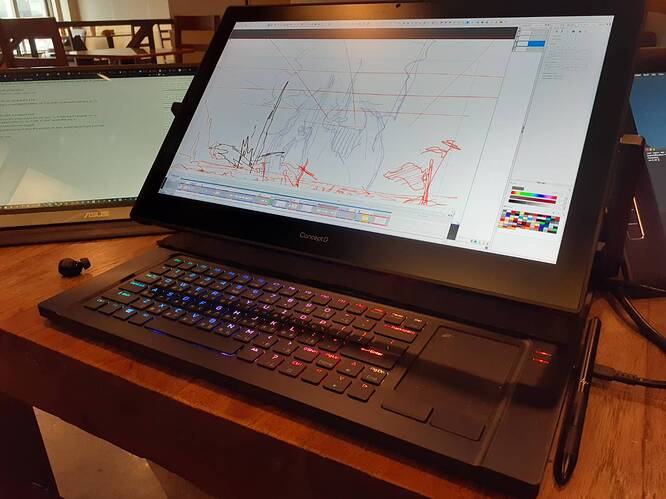 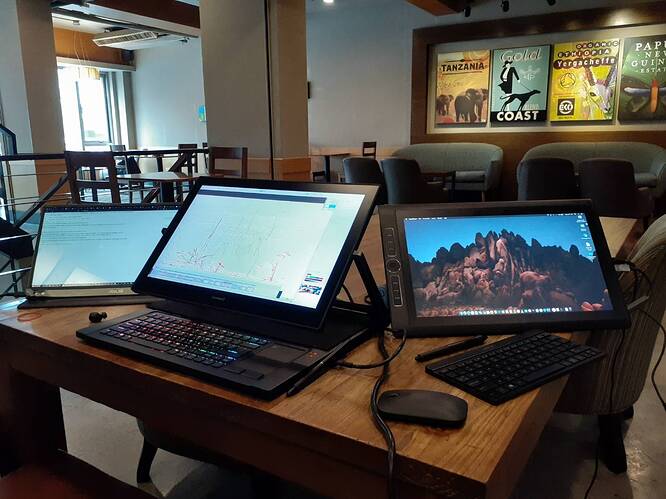 Looks great, but the price…

And geez, you really take over the Starbucks! Here in Japan, I’d be lucky if there were ever that much table space free (I don’t think my local Starbucks even has a table that big)!

What bag are you using to carry this rig?

And geez, you really take over the Starbucks!

That was my foremost reaction. I rarely frequent Starbucks so I don’t know if that’s normal, but if so that’s kind of… Impressive? That they allow it, I mean.

So cool to see photos of this legendary unicorn in use! It’s still the dream machine I no longer need, I love the practical powerhouse nature of it… Was it hard to purchase? I remember not even seeing it available for sale at all here in Canada. I assume they don’t make them anymore as it’s fairly old hardware now, but dang, if ever a used one comes up at a decent price I may just have to grab it for my museum of past unicorns haha.
No Feel drivers… does that affect pressure curve in Photoshop? Or is it just not let you map buttons and use Wacom’s customizable drivers?

True, this particular starbucks is unique and happens to be near me. I had to capitalize

A regular Targus bag . All of this items fit within one bag. They are not thick so is quite manageable.

as long as you consume over the day they are usually ok. Ah, dont eat from other stores

I am not sure if the still make them, but you can still order one from Acer Taiwan. That is where I got mine from. These uniques very portable despite the bulky look. Also, no store was going to keep the machine in stock unless it was a store B and H photo, Adorama. These are mainly special order Items

Regarding drivers, performs just as you would expect a wacom pen to perform, but I do miss fiddling with the tip sensitivity of the dedicated drivers

What’s the matte texture like when drawing? Is there any friction? Or is it pretty smooth and just doesn’t reflect light a lot?

Good question, but it feels pretty much like the Cintiq 27 inch texture I have.

That’s actually pretty cool. Friction and screen texture is important to me. I wonder if the other models, like the D7, also have this texture? D9 is out of my price range, but other models aren’t.

Can you speak to the laptop as a whole? Typing experience, sound quality of the speakers, etc. I know you probably didn’t buy it for these things, but I think most would use it as their primary laptop if they got it.

It is a fantastic laptop. Is very well built and sturdy. Feels expensive, and the tooling is top notch.

However, not everything was rosy, the keyboard had to be replaced twice. See, this model shares the same chassis as the Triton 700, but that model does not have a Wacom EMR pen tech, Quadro, matte finish display, Delta 1 4k display…but it does have a functional keyboard.

The keys on my unit unlike the Triton, were made out of metal, and they did feel special. But I always had some keys with problems. By the 3rd try, Acer went ahead and mounted the RGB keyboard on my unit of the Triton 700. They are the same shape but are the usual plastic. And now rather than being dark orange light, they are RGB. Not going to lie, I am digging the RGB, but do miss the metal keys. However ultimately I need to type, and that I can do now and quite well.

The other area I am happy is power, This is a very powerful laptop, desktop level of back in 2018-9 Having 16GB video ram is great for 3D models, and the I9 CPU has no problems at all. The GPU can power high resolution VR headsets with no issues. I am very very satisfied with the unit.

Impressive setup. If I didn’t look at your text I would have thought it is your home office

From your experience, the D9 seem to be a real unicorn without much caveat. It’s interesting seeing the MSP as secondary screen next to it, considering it had been an old unicorn back in the day. Does the D9 have 2 HDMI port or do you use an adapter? Are you driving all three screen at 4k?

Also slightly off topic, but does the processor inside the MSP run when using Cintiq mode ( does the Cintiq mode run independently with separate power button or do you have to turn on Windows to connect it as a Cintiq)? Does it run hot in Cintiq mode?

Is the screen of the D9 hot to the touch? How does pen performance feel compared to the MSP (I assume pen is not interchangeable with the MSP)? Is the hinge stable?

Glad you liked it.

The Mobile Studio only requires one single cable attached to the D9 via Thunderbolt and thats it. I found about it by accident. So no converter is required to hook them up.

The D9 screen does not get hot unlike the Wacom. Th screen casing is thick so maybe the insulated the backlight well enough to minimize the heat. Super comfortable on the had and ample space to move your hand around. It is seriously the best tablet experience I’ve had, I I own a lot of tablets and Cintiqs. I do miss proper feel drivers

If the Wacom MSP is connected via Thunderbolt it gets less hot on the display because the GPU and CPU are not generating as much heat. I do like the brightness and colors better on the D9 and also how flexible I can set the position of the tablet. I draw now mostly on it and not so much on the wacom

The Screen is indeed touch, but I disable it mainly use the pen. The Performance is similar to the 4k pressure of the 27 Cintiq inch I have. The eraser pressure and activation is better on the Cintiq. I am using the HP x2 g4 pen with the eraser.

The hinge is stable for me but there is a bit of adjusting to it. You can set it against the keyboard if you want ultimate stability, over time I rise it high up closer to me. I found the ideal angle for which is sturdy for me. I pretty much use that elevated position now to draw. If you look at the picture I posted, that is the position I use for drawing

Gotta say, I´m surprised those are still available. Just like the HP Z Book X2, the Acer ConceptD 9 Ezel suddenly disappeared w/o any comment by the manufacturer.

Besides the MS Surface Pro 8/Surface Laptop Studio, the ConceptD 7 Ezel is still a viable way to go for me. Recently, the ConceptD 7 Ezel was upgraded from 10th gen Intel CPUs to 11th gen. Along with that came a hefty price increase to around 5.000€, which is basically as much as the Conceptd 9 Ezel cost while it was regularly available.

Yeah, I saw the Concept D 7 and is nice with updated internals. Although the wattage of those components are not the flown wattage unlike the Concept D9. However the new tech will always out do the older tech. The construction of the 9 is better than the 7, also the hinge is more robust. Having said that there is quite a price difference from 6k down to 3.5k

Man I so love the eazel format with the keyboard in the front!

I fell in love with it with the first Acer R7-572 15 inch laptop, and love is so much that I have not bought a new laptop ever since, I just by parts or used on eBay when I need to fix something

For me the trackpad is almost useless on that configuration. For casual work, I have the keyboard and the touch screen and the format makes it very compact. And for heavy duty work, I use a mouse anyway…

I have been dying for someone to revive the format ever since, disappointed when they (Acer and recently Microsoft) made new easel models but with the keyboard at the back, which makes no sense to me as I need the keyboard way more than I need the trackpad.

The Concept D9 pro is just too big and heavy for my use, so I keep hoping someone will make a 15” light version with the same keyboard layout…

If no one picks up the ball, maybe I will try the upcoming 17” foldable from Asus

It would offer a larger screen than the Acer R7, and a compact setup with the keyboard in front of it, while in a compact and light to carry.

The one thing that I hope they would have included is a pen on it….

The funny part, is that when they abandoned the design back in the day, I sent them a possible design alternative with the trackpad besides the keyboard. 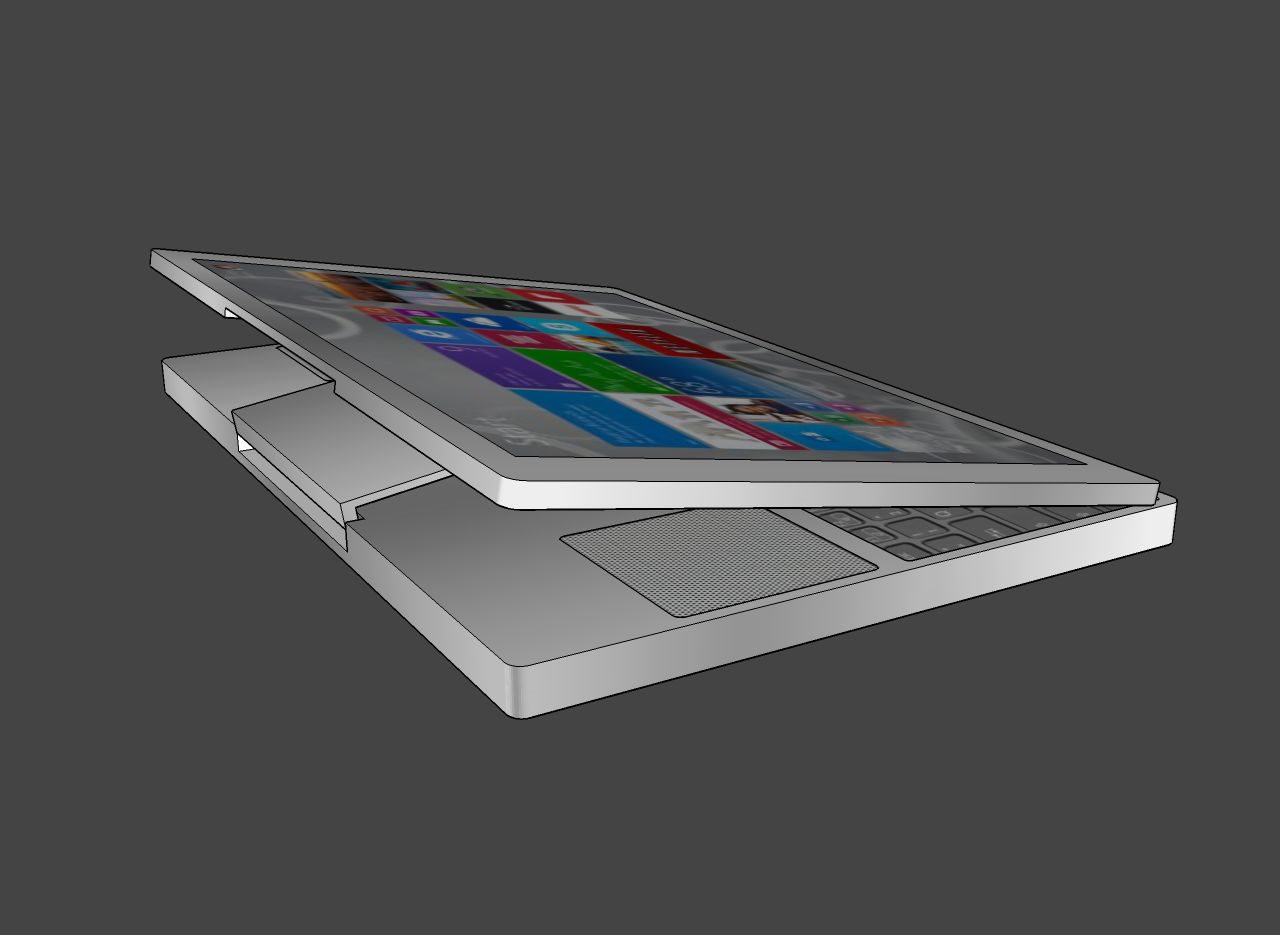 And I also suggested a modular approach to the various components (keyboard, Track pad , Num pad) with magnetic modules that users could configure as they wished