15 years of the iPhone

You can argue about the details or the specs, but It’s hard to argue against that the iPhone is one of the most impactful devices ever made, and led directly to Apple from being a niche company to (at points anyway) the most valuable company in the world. 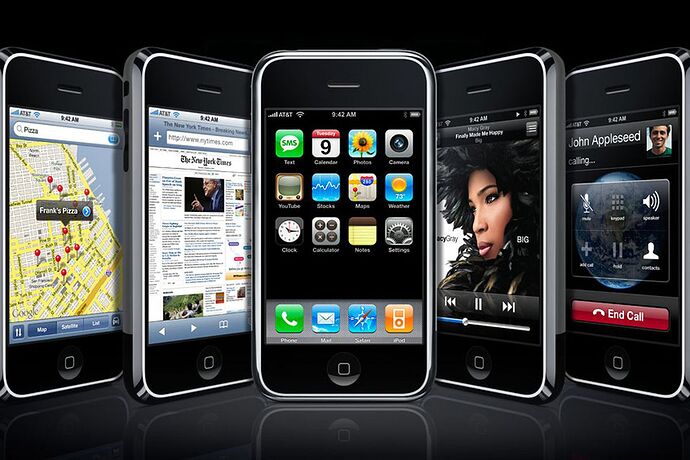 15 Years Ago Today, the iPhone Went On Sale

Fifteen years ago to this day, the iPhone, the revolutionary device presented to the world by the late Steve Jobs, officially went on sale. The...

There’s a book about this which I’ve been meaning to get:

The big thing is it shows how a minimalism guided by technological limitations made for a success:

That said, it’s a really disappointing to see this from the company which made the Newton, and there still isn’t a device I’m really excited about owning:

I keep thinking I should get the Lenovo ThinkPad tablet where the keyboard has a Trackpoint, but I don’t want to give up Wacom EMR — I guess my next device will be a Mac mini, a Wacom Cintiq, and some sort of satchel to hold everything together, and I’ll have to have an iPad and Apple Pencil for when I actually do need to be mobile — going to miss the synergy of my current Samsung Note 10+ and Galaxy Book 12 though.

All I want is a device which lets me use a Wacom EMR stylus in direct sunlight and has touch (for scrolling, &c.) and which runs Macromedia Freehand and some contemporary applications and doesn’t require me to constantly fret about updates breaking things — why is that so much to ask?

Yeah, there is definitely a disconnect there as Apple engineers will also say that a good bit of Newton tech ended up in the iPhone.

OTOH given Jobs insistence on touch first/only may be a mixed blessing.

And related to that, anecdotally, one former Apple engineer and is now one of our consultants, that worked on early iPhones and the first iPad has said that Jobs contempt for pens was genuine and multifaceted. He didn’t like the give of the screen in early devices like the Palm Pilot and was offended aesthetically by how those displays looked after any extended period of use, with scratches and dents (which certainly was the case with my palm pilots and even my Motorola Windows Phone

And to your broader point, there is a school of thought, that I agree with, that major constraints can actually be a good thing that leads to the real genuine breakthroughs.

I can think of a lot of negatives and a few positives. The iPhone itself is just a tool (as are its competitors) but the doors it opened have had a huge impact on students and young minds I have worked with over those 15 years.

The iPhone itself is just a tool (as are its competitors) but the doors it opened have had a huge impact on students and young minds I have worked with over those 15 years.

It’s having quite an impact on this old mind as well. Just today I deleted the Reddit app realizing I was spending an inordinate amount of time aimlessly scrolling. Let’s see if I can go cold-turkey on that one.

Let’s see if I can go cold-turkey on that one.

Wish you all the best. I remember recently when the Facebook and Instagram Apps broke for 3 days and teenager mental health for the same period was hugely improved.
Soon as they went back up - the kids were back, hooked again.

Wish you all the best.

Haha, I’ll need it. I just ended up on Reddit searching for a solution to one of my AirPods not working. Bravely closed the tab afterward though. Side note, and iPhone related, Apple and Jobs in particular were responsible for my ongoing search for tech-highs / device-dopamine. The iPhone introduction was so spectacular that I’ve been craving that some “OMG I can’t believe this is real” feeling ever since. These days I’m getting some of that from the insanity that is SpaceX’s Starship development program.

All I want is a device which lets me use a Wacom EMR stylus in direct sunlight and has touch (for scrolling, &c.) and which runs Macromedia Freehand and some contemporary applications and doesn’t require me to constantly fret about updates breaking things — why is that so much to ask?

It is too much to ask young apprentice…love Timmy, Satya, and Kho

“When railroading time comes you can railroad—but not before.”
― Robert A. Heinlein, The Door Into Summer

The smartphone was inevitable given the advances in technology. Who would be first, what initial form it would have—those were the only questions. People glamorize Jobs way too much for being ahead of the curve by just enough to take the credit.

People glamorize Jobs way too much for being ahead of the curve by just enough to take the credit.

Agreed on the first part, but Apple really sped up the development by doing several things really well before they became mainstream, setting the standard for years to come. GPS (with the 3G I think), A real browser, apps, the slick conference call implementation, the fullscreen touch screen and touch keyboard. The whole package was just so alien, loved it at the time.

I agree, there is far too much worship at the cult of Jobs. OTOH He did have a knack for seeing some things far earlier than most which is part of the “sometimes people don’t actually know what they truly want, until you show it to them” thing he often espoused

Exactly, going all the way back to the Lisa and original Mac. Jobs could see how what PARC was doing could be a viable consumer product.

Or for that matter what WOZ did with the original Apple.

Apple really sped up the development by doing several things really well before they became mainstream, setting the standard for years to come.

But in the long run, as to what devices/capabilities we would have today, things likely wouldn’t be much different. Maybe Microsoft would have been the leader instead, maybe Blackberry, maybe… the possibilities are endless but I 100% believe we’d end up bemoaning kids addicted to social media on their smartphones regardless. And blaming whoever was first!

I’m not sure I buy that…
I’ve heard the same thing said about the automobile or for that matter the cell phone generally. The genius is seeing something and realizing how to make it viable in the market.

Even the electric car, which has been kicking around since I was a teenager, but it took Musk (love him, hate him or possibly both) And I believe that skill is extraordinarily rare IMHO.

Even the electric car, which has been kicking around since I was a teenager, but it took Musk

We shall have to agree to disagree because I don’t buy that. It was the battery technology that allowed it and if Musk didn’t do it somebody else would. At best he made it happen a little bit sooner than otherwise might’ve occurred.

Don’t you know, you can go ahead and kill Hitler or your grandfather with a hypothetical time machine. It just creates a new timeline where they’re dead and leaves the original timeline unaltered.

BTW I do think there is near universal agreement that the iPhone was truly transformational for Apple itself. In fact I’d argue that Apple likely wouldn’t even be around at least as it’s own company. It might have survived as a niche division of a much bigger company; like Alienware, but I have my doubts about even that.

And instead of veneration people would be saying Steve who?

Well that’s the basis for “history is written by the winners…” which is a whole other internet rabbit hole.

And for the record, I admire Jobs as a businessman to a point. But I also agree he was a complete and utter a-hole as a person. including years ago to me when he was at Next and I was still with Radius.